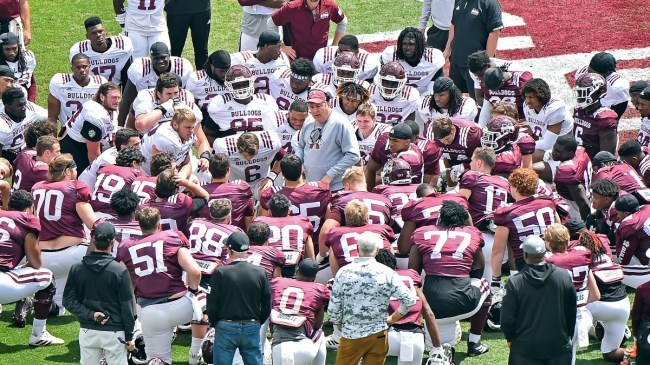 The college football world is still recovering from the sudden death of Mike Leach. Many have pondered the future of Mississippi State since then, as the football team tries to move on without him.

Well, the new quarterback commit Chris Parson shares an inspiring message that should put the fans and his future teammates at ease.

According to 247 Sports, it sure sounds like Mississippi State is going to retain Chris Parson in their 2023 recruiting class. Especially considering the message he had for the program in the wake of Mike Leach’s death. Here’s his full statement below.

It sure sounds like the Bulldogs have a good one in Chris Parson. His perspective is definitely unique. Especially considering he and the rest of his class will be the last ones to represent Mike Leach. It’s incredibly touching, as we’re sure everyone involved with the program and Leach appreciates his kind words.

Mike Leach, of course sadly passed away after suffering a heart attack about a week ago. He played an integral role in how the game of football is played. From the college level to the NFL, his coaching philosophy can be seen everywhere on the offensive end.

With that said, it sounds like Leach reeled in a solid recruiting class for 2023. Especially considering it seems most of those guys are choosing to stick with Mississippi State despite the sudden change.