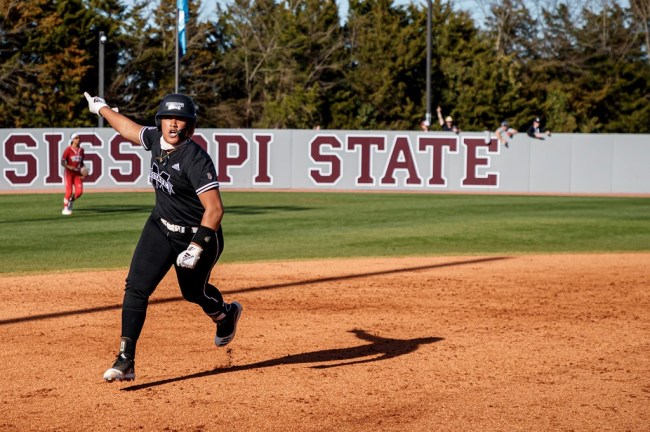 Lightning struck twice for Mississippi State softball over the weekend. The No. 18-ranked Bulldogs had their backs against the wall in back-to-back days, but first baseman Ulufa Leilua delivered in the clutch on both occasions. Leilua, who goes by Fa, is a fifth-year graduate student who began her collegiate career with Arizona State before transferring south as a junior. She absolutely mashes and was tied for 10th amongst active NCAA players with 50 career home runs after the 2020 season. The Hawthorne, Calif. native has added eight more to her career total this year, with her two most recent moonshots coming in big-time spots.

With Saturday’s game against Alcorn State tied at five in extra innings, Leilua took a 2-2 pitch VERY deep for the walk-off nuke.

While the massive tater was one thing, her celebration was another. She was confident on contact and flipped her bat down the first base line before she even took a step out of the box— staring down the opposing dugout and letting them know it was gone.

It was a similar scenario on Sunday when Mississippi State went to the bottom of the 7th inning, trailing Western Kentucky by a run. Leilua got up to bat with a runner on and one out. She worked a 3-2 count and made the Hilltoppers pitcher pay for leaving one over the dish. Her second walk-off dinger in two days was even more savage.

She does it again!

Once again a no-doubter, the bat was out of her hand instantaneously. What she did after hitting the bomb was ruthless. Leilua made her way to first base, screaming directly at the WKU dugout and banging her chest.

Downright disrespectful. I love it when the game is played loud and I can’t wait for my Rebels to flip the script in SEC play.