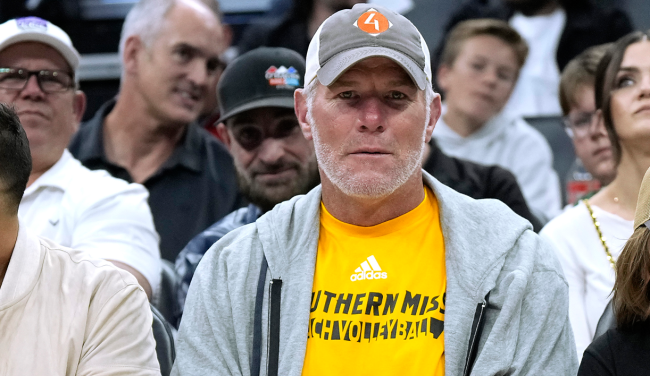 This past April, a new report claimed that Brett Favre had ties to an ongoing political corruption scandal in Mississippi.

Favre was accused of being part of a welfare embezzlement scam that also involved the former governor of Mississippi Phil Bryant, WWE Hall of Famer Ted DiBiase, and his sons Ted DiBiase Jr. and Brett DiBiase, and several others.

The report revealed several important details about Brett Favre’s alleged involvement in the scandal including being paid $1.1 million for speeches he never actually gave.

Favre claimed he had “never received monies for obligations I didn’t meet” yet still admitted that he paid back $1.1 million to the state of Mississippi (without any interest).

This week, the Mississippi Department of Human Services filed a civil lawsuit against 38 individuals or entities, including Favre, the DiBiase family, and former NFL running back Marcus Dupree, seeking the return of $24 million in misspent federal welfare funds.

“I do not understand these people,” attorney Brad Pigott told Mississippi Today. “What kind of person would decide that money the law required to be spent helping the poorest people in the poorest state would be better spent being doled out by them to their own families, their own pet projects, and their own favorite celebrities?”

Circumstances outlined in the lawsuit echo Mississippi Today’s reporting in its investigative series, “The Backchannel,” including Brett Favre’s involvement in the use of MDHS funds to purchase personal investments in the pharmaceutical start-up Prevacus, which was developing a treatment for concussions.

Favre already knew that Nancy New had access to millions in few-strings-attached federal grant funds because he got her to pay $5 million towards the new volleyball stadium that the quarterback was credited with helping build at their alma mater University of Southern Mississippi, texts show.

Favre encouraged his business partner, Prevacus founder Jake Vanlandingham, “to solicit Nancy New to use MDHS grant proceeds to invest in the stock of Prevacus,” the lawsuit reads.

“She has strong connections and gave me 5 million for Vball facility via grant money. Offer her whatever you feel like,” Favre wrote Vanlandingham by text, Mississippi Today first reported.

This text came just two days after the two men met with then-Gov. Phil Bryant to discuss how to elevate and find funding for the company.

The lawsuit is seeking $3.2 million in restitution from Favre, plus another $1.1 million from his company Favre Enterprises.

Favre has been telling Wisconsin news he paid back all the money years ago.🙄

His embezzlement scheme with his concussion drug should be a much larger story in the sports news than what it has been so far. This story is almost nothing compared to the scale of the crimes he committed.

This is preposterous! Why in the world would he need the money? He's already financially well off. What was the end game?

Misspent? Not stole? Not defraud? Not conspiracy to defraud? So if they have a famous pedigree, a suit and tie on, it is misspent state funds. How does one misspent what they were never entitled to receive?

The fact that a former NFL quarterback, former Miss St. linebacker, and some pro wrestlers are being sued to recover $$$ that was supposed to go to poor people pretty much tells you what you need to know about Mississippi's welfare system. https://t.co/b7gA39x28b

Also named in the lawsuit, former WWE wrestler Ted DiBiase Jr. allegedly received over $3 million in anti-poverty funds even though he possessed no qualifications to provide Temporary Assistance for Needy Families (TANF) services.

DiBiase’s brother Brett DiBiase also received payments totaling $600,000, according to the lawsuit, yet “never performed services of any significance which served any lawful TANF purpose.” Brett DiBiase also attended a luxury rehab clinic in Malibu, paid for by the non-profits and received income from them while he was there.

A ministry called Heart of David, run by WWE Hall of Famer Ted DiBiase Sr., is also being sued for $1.7 million by the state, with another $2 million being sought from wrestler himself.

The full list of defendants and the amount of money the state of Mississippi is seeking from each can be viewed here.