Missouri’s 236-Pound Kicker Disrespects The Troops, Proceeds To Feel The Wrath Of The U.S. Army 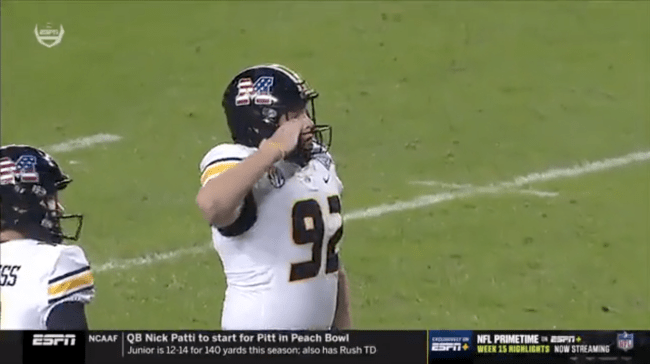 (Author’s note, because people are VERY #MadOnline: I am a big Thiccer fan and openly pro-taunting, especially in a GAME played by 18 to 22-year-olds. It is fun. This is fun. Everybody remember to breathe.)

Missouri kicker Harrison Mevis is a cult legend within college football. But he made a big mistake on Wednesday night.

After finishing the regular season at 6-6, the Tigers were invited to play in the Armed Forces Bowl. Played at TCU’s stadium in Fort Worth, Missouri traveled south to face the United States Military Academy, better known as Army.

Just before halftime, Mevis was called onto the field for a 39-yard attempt. At 5-foot-11, 236 pounds, Mevis is better known as the “thiccer.”

As the clock ran down in the second quarter, he knocked in his third field goal of the first half and put Missouri ahead 16-7. However, he made a massive error.

Mevis, after the kick flew through uprights, proceeded to stand at attention and gave a very embellished salute.

It was a savage move that, in almost any other situation would have been funny.

What happened next, however, made it anything but. He lost.

Army began the third quarter by going 75 yards on 17 plays, finding the end zone and cutting the lead to two. The Black Knights proceeded to force a three-and-out, drove 56 yards in six and a half minutes, and took the lead 21-16.

The Tigers tried to put the game with a touchdown of their own as the clock wound down to 1:11, but it wasn’t enough. Army took over, went 51 yards on seven plays and moved into field goal range.

On the eighth play of the drive and final play of the game, Army knocked in a 41-yarder to win it in walk-off fashion.

IT'S GOOD 🙌@ArmyWP_Football wins the @ArmedForcesBowl with a 41-yard FG! pic.twitter.com/o5vWRJuRod

Mevis’ stolen valor sure looks silly after the loss. Never, never disrespect the troops, or feel the wrath.