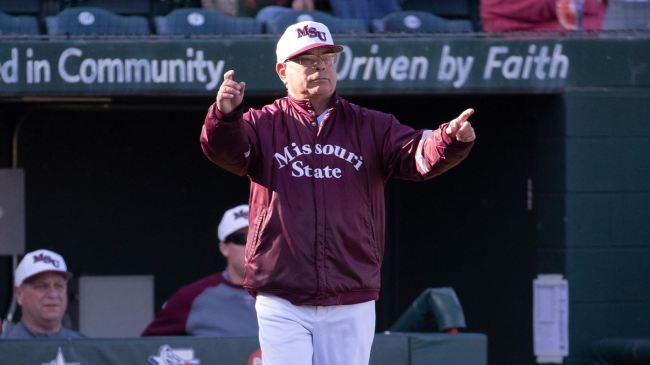 Missouri State baseball traveled to Stillwater, Oklahoma on Tuesday for a midweek matchup against No. 18 Oklahoma State. After falling behind 8-3 in the fifth inning, the Bears battled back to with one run and loaded the bases with one out in the top of the seventh. Ben Whetstone stepped up to the plate and had an opportunity to give his team the lead, but he was rung up on a very incorrect strike three call. The pitch was a good foot low and outside. It was incorrect.

This home plate umpire in the @MSUBearBaseball v @OSUBaseball is terrible. This was strike three with the bases loaded… pic.twitter.com/pcxewT89Wn

Head coach Keith Guttin came out to argue the call with the home plate umpire and received a swift ejection after some choice words. What happened next was glorious. You see, for Guttin to get sent packing meant that he would have to return to the visitor’s locker room. The Bears were positioned in the first base dugout, while the locker room was out in left field. Thus, Guttin made the long walk around home plate, down the third base line and into the clubhouse. He made sure to get his money’s worth and took his sweet, sweet time. To make it even better, he picked up his bag and brought it with him, which added an extra element of sass and completed the visual.

Guttin’s showmanship fired his team up and shifted the momentum away from the Cowboys. After play resumed, with two outs, Cam Cratic gave the Bears a lead with a single into right center that knocked in two runs. Missouri State went on to win the game 11-8 and pull the midweek upset, avenging a loss to Oklahoma State earlier in the season. The Bears a consistent NCAA Regional team, but they will need a strong finish to reach that point again. Perhaps Guttin getting tossed is the spark that sets the fire.