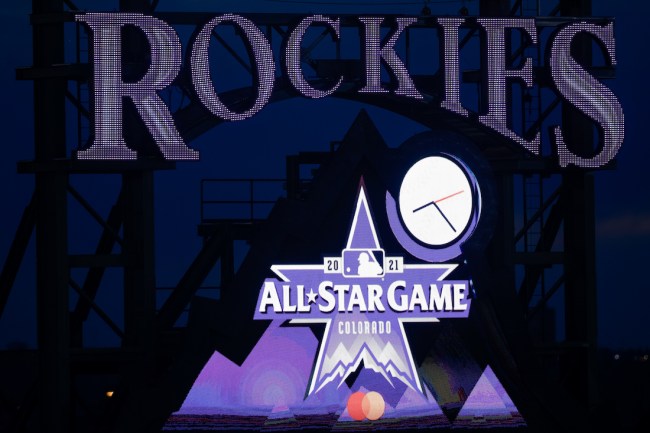 The MLB All-Star Game is always a fun summer event, giving baseball fans a chance to see their favorite players show out in the annual exhibition. From the Home Run Derby to the Celebrity Softball Game to the main event, MLB’s Midsummer Classic has always brought some amazing memories. The 2021 version should be no different.

With the game now being held on July 13 from Denver’s Coors Field — a swap which occurred earlier this year after initially being planned for Atlanta — the event already had a lot of attention. But the whole thing seems to be blowing up even more this week after MLB released the uniforms for the event, which, well, are horrendous.

Don’t believe me? Lay your eyes on these MLB All-Star Game uniforms and ask yourself if you’ve ever seen an uglier sports uniform.

Story and a bunch of pics right here: https://t.co/cWy8jazrQN pic.twitter.com/xYrEO7uR9k

What the hell are these things? Whoever’s in charge of design at MLB needs to be called into his/her bosses office and be reamed out immediately, because these are ugly AF. From the purple star beneath red team logos on the hat, to the abbreviated team names down the left side of the jersey and the weird design on the sleeves, these particular MLB All-Star Game uniforms should probably just be donated to some random country like they do with unused championship shirts. Yes, that’s how bad they are.

Considering these MLB uniforms are an absolute sartorial nightmare, it didn’t take long for fans on social media to speak out about the disaster. Take a look at some Twitter reactions below.

Didn't think they could come up with anything worse than these Player's Weekend uniforms – but MLB says: "Hold My Beer" pic.twitter.com/CmTPXqx5QJ

🤦🏻‍♂️🤦🏻‍♂️🤦🏻‍♂️Ugh. Just another terrible decision by MLB. Seeing all the unis on display is one of the best parts of the ASG.

Hate it. Hate the whole create-new-stuff-for-every-darn-occasion thing. Do they think they are really going to sell that much of this dreck? Ugh.

The person in charge must be legally blind.

The jersey logo looks like something out of a soccer kit

This jersey would have been better and i made it in 45 seconds pic.twitter.com/xISTaQYRN6

I’m not saying I always look stylish. I’m not saying I always match my top with my bottom or my shoes with my belt. But I am saying that I could’ve done a better job designing the MLB All-Star Game uniforms. Yes, that’s how bad these things are. It’s even worse that MLB’s breaking tradition and having players wear these during the Midsummer Classic — rather than their respective team uniforms.

It seems like MLB has a history of really messing up uniform designs, so these MLB uniforms for the All-Star Game seem to be the latest example. Maybe, just maybe, we’ll see something better at some point in our lifetime… but that may be too optimistic.