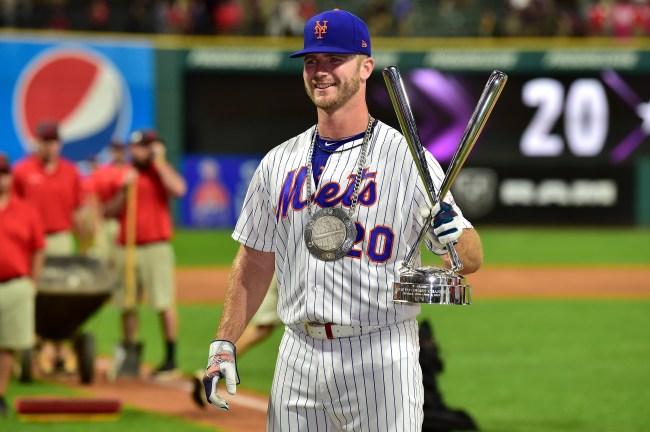 Vlad Guerrero Jr. and Joc Pederson put on one of the greatest hitting shows the Home Run Derby has ever seen, with three exhilarating tie-breakers in the second round that resulted in 79 dingers between the two of them.

I’m still trying to wrap my head around how one of those dudes didn’t win the Derby, but the crown was well deserved by New York Mets rookie Pete Alonso.

The 24-year-old first baseman overcame 5/1 odds to win the 2019 Home Run Derby by defeating Guerrero Jr. 23-22 in the final round, despite Guerrero hitting 34 more bombs in the competition.

Alonso, who set a new NL rookie record with 30 home runs before the break, needed the $1 million grand prize more than any other participant. The man whose nicknamed “Polar Bear” is currently playing out a one-year, $555,000 minimum deal. Alonso made twice the money in 3 hours than he will have made his entire debut season in the MLB.

Alonso won the Derby at the right time, as the prize money was significantly increased this year due to a collective bargaining agreement between the MLB and the Players Association.

Alonso said he plans to donate five percent of his prize ($50,000) to the Wounded Warrior Project along with five percent to Tunnel to Towers, an organization benefiting first responders.

Good on ya, Pete!

So much respect for Pete Alonso after this interview! Completely selfless interview and act to donate 10% of winnings! This dude might be a rookie but he definitely acts and plays well above his years! These are the type of guys baseball and sports need 👏🏼 pic.twitter.com/cz1kas669w