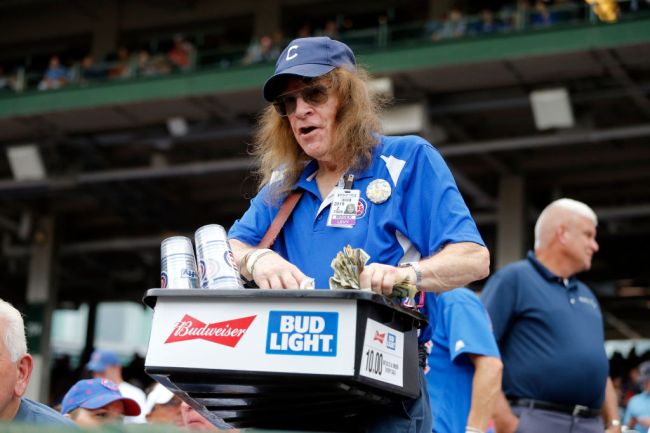 Baseball season is upon us and that means the return of cold beers and hot dogs at the ballpark. There are very few things that pair better than a 75-degree day and an ice cold brewski with the crack of the bat and smack of the mitt in the background. Part of the experience for a long, slow-burn game is getting a long, slow-burn buzz, but some fans take that notion further than others. A recent survey by NJ Online Gambling determined the “booziest baseball fans” and the results may surprise you.

From Jan. 27 – Feb. 17, 2021, we surveyed 2,631 self-reporting Major League Baseball fans who were over the age of 21 from around the country. Fans were asked how many alcoholic beverages they typically consume while watching a baseball game as well as how much they typically spend on alcoholic beverages while watching a baseball game. 58% of respondents were male and 42% were female. The average age of respondents was 36 years old.

Broken down by average drinks per game, Chicago White Sox fans take the crown, while Philadelphia fans ranked at the bottom. 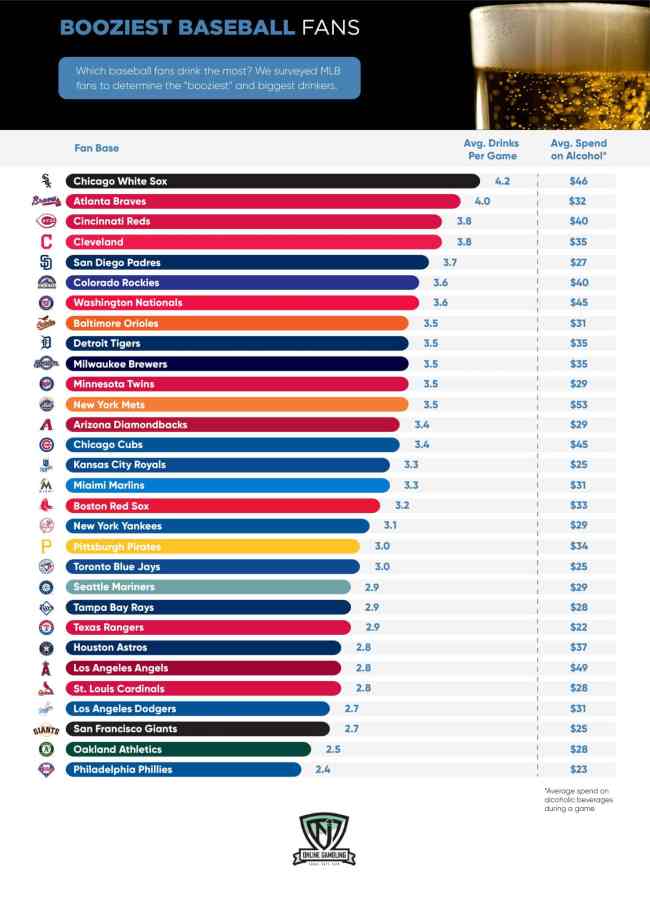 There aren’t too many surprises here, but there are a few worth noting— starting with the top spot. It’s not to say that the White Sox faithful don’t get rowdy, but for them to out-drink their crosstown rivals by almost a full beer is astonishing. Cubs fans are notoriously big drinkers, crushing Goose Island IPAs at an alarming pace for a beer that doesn’t go down like water. Perhaps some of the gap comes from the amount of drinks beforehand, as those headed to Wrigley Field have likely crushed a pitcher or two in Wrigleyville, allowing them to settle into an IPA every three innings or so.

On the other end, having Philadelphia at the bottom is also a surprise. I would venture to believe that Philly fanatics are averaging more than a beer every 3.2 innings and those numbers are off. There’s no way that the techies out in Silicon Valley are out-drinking the Charlies and the Macs of the world.

In middle of the pack, three standout. St. Louis, Boston and New York. St. Louis is the hub for Anheuser-Busch, and having Cardinals fans near the bottom is a shock. Maybe their intake is so low because it’s a consistent buzz throughout the day and once they get to the ballpark, it’s time to coast. Boston and New York are the others. Both fanbases love to booze, but perhaps Bostonians get their fix in on the B, C and D trains while New Yorkers do the same on the No. 4 and D trains. The price of a ballpark beer can be pricey and you have to take the subway anyway, so getting down a few suds on the way would make a lot of sense.

The rest of the list makes sense. Braves fans aren’t the rowdiest bunch, per say, but they sure do love their baseball. And like I said, baseball and beer is a marriage that will last a lifetime. Few things get people in the South more fired up than a cold snack on a hot summer day at the ballpark. Cincinnati and Cleveland are the heart of the Midwest. They love their hops. You may not know this (I only found out recently), but San Diego has a significant craft beer scene that carries over into Petco Park. Colorado crushes Coors. Washington, Baltimore, Detroit, Milwaukee (slightly surprising that it isn’t higher), and Minnesota make sense as middle-of-the-pack drinkers.

What are you most surprised by? Let us know in the comments!