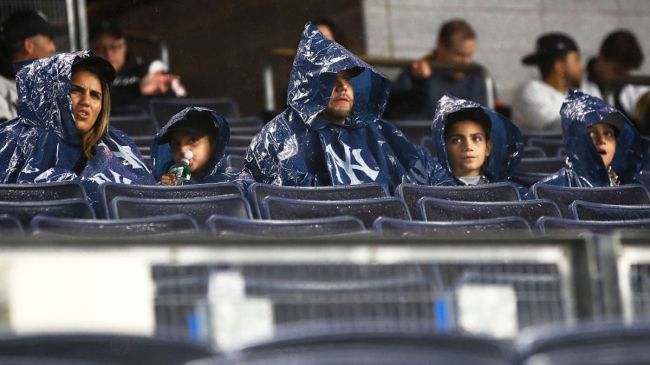 After Monday night’s winner-take-all ALDS game between the New York Yankees was postponed until Tuesday, baseball fans immediately took to Twitter to flame MLB for how they handled the situation.

While Game 5 between the Yankees and Guardians was supposed to begin at 7:07, rain forced the game to be delayed and then eventually postponed. The problem, though, is that MLB did not announce the game’s postponement until after 10 p.m. Adding insult to injury for sports fans across the country was the fact that Russell Wilson and the Denver Broncos were simultaneously stinking out the joint on Monday Night Football.

Wow. Those fans only waited a few hours…. 🤦 https://t.co/sSkVO9jFUU pic.twitter.com/F8UnnTdgZK

“Did they really make people wait around in the Bronx for this?” questioned ESPN Radio’s Alan Hahn.

Did they really make people wait around in the Bronx for this? https://t.co/noBtX31XQp

We watched Dwyane Wade’s game show for nothing. https://t.co/LrjK5MJMxC

“Will the people who just watched 2 hours of a Dwyane Wade game show be reimbursed?” this Twitter user joked.

Will the people who just watched 2 hours of a Dwyane Wade game show be reimbursed ? https://t.co/foA0tOWtUM

To make matters worse for fans, their Game 5 tickets are only valid to get into TODAY’S Game 5 — which was moved from being a night game at 7 p.m. to an afternoon game at 4 p.m. — and are not eligible for a refund.

Tickets for tonight’s scheduled game are valid for the 4pm game tomorrow. No refunds or exchanges. pic.twitter.com/vjgkrJjBEI

Game 5 between the New York Yankees and Cleveland Guardians will now take place in the Bronx on Tuesday evening at 4:07 p.m. The winner of the series will take on the Houston Astros in the ALCS, which begins on Wednesday night in Texas.