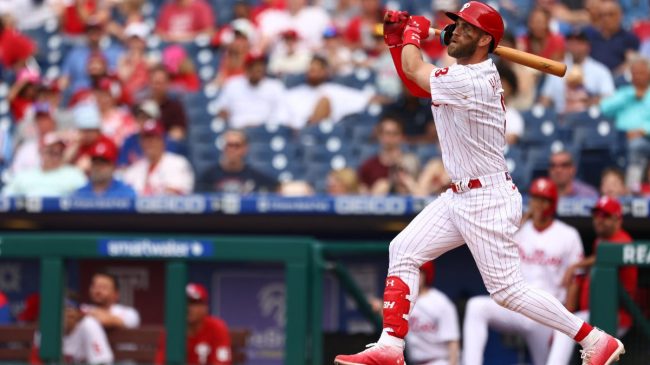 The Major League Baseball season has gotten off to an exciting start.

Through one week of play, we’ve already seen a three-homer performance from Vlad Guerrero, a near perfect game from Clayton Kershaw, and a number of extra inning finishes.

Fans had to wait a bit longer than usual due to the lockout, but the sport is now in full swing.

As is the case with all sports, with baseball comes sports betting. We’ve already seen a few improbable MLB bets cash in to provide bettors with massive payout. On Wednesday, another wager paid out, this time in the form of a five-leg home run parlay.

This bettor successfully predicted that Austin Riley, Bryce Harper, Ji-Man Choi, Aaron Judge, and Eloy Jimenez would go yard. The ridiculous odds were set at +159082 or about 159/1.

Harper is the biggest name on the slip, but this was just his first round-tripper of the year.  He’s gotten off to a slow start, recording just three hits on the season thus far. This bettor picked the right night to include the slugger, though.

The same is true for Judge. Though he’s hitting a respectable .292 on the year, Wednesday’s homer was also his first of the year.

Riley and Choi have gotten off to hot starts, but they’re typically not the top of mind when thinking of home run candidates. And I’m not sure where they pulled Jimenez from. He entered homerless in 2022 while hitting just .200.

Not a bad way to start the MLB season.