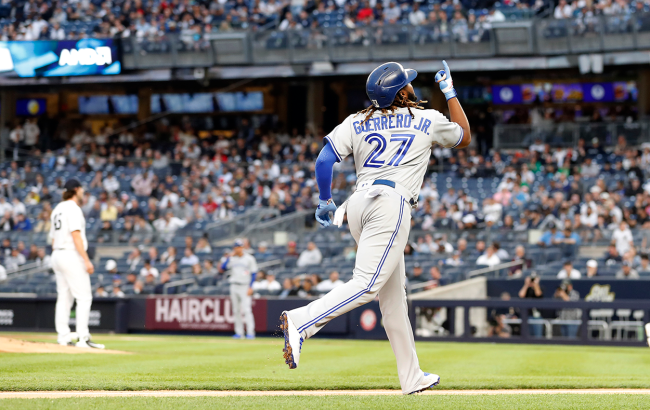 Vlad Guerrero Jr. had one of the best singe nights at the plate of all-time on Wednesday. As the Blue Jays squared off against the Yankees, the Toronto third baseman hit three home runs and they are even more impressive given the circumstance.

The review was just to get another look at this swing 💥 #PLAKATA pic.twitter.com/2rYlGVb5rq

Not long thereafter, Guerrero Jr. had his hand stepped on and bloodied in the field.

His finger was messed up, but he stayed in the game.

did all that after his finger looked like this pic.twitter.com/LFWzRHh5Az

Not only did Guerrero continue to stay in the lineup, but he did some serious damage. In his next at-bat in the third inning, the 23-year-old went yard off of Cole once again.

The definition of DIFFERENT! pic.twitter.com/fcpUXfT4yZ

The towering two-run home run went 427 feet with a launch angle of 21 degrees and an exit velocity of 109.1 miles per hour. It was gone in a hurry.

The definition of DIFFERENT! pic.twitter.com/fcpUXfT4yZ

If that wasn’t impressive enough, the contact that Guerrero Jr. made on the ball was not particularly confident and the aerial view of the home run puts it in even better perspective. The pitch was inside and he had to contort his body to even get his bat on the ball, let alone send it 427 feet.

To continue his evening, Guerrero Jr. added a double off of Cole that left the Yankees pitcher only able to tip his cap at the performance.

Vladdy is SO good, you can't help but tip your cap 💥 pic.twitter.com/3O2L4cLoMX

And he wasn’t done there.

Guerrero Jr. hit another home run in the eighth inning — his third of the game.

It was an insane performance and it was something that Vlad Sr. had never done.

Vladimir Guerrero Jr. has three home runs tonight. His dad had 449 career home runs in 2,147 games, but he never hit three in a game pic.twitter.com/P35Wy09ceq

What a night for the young superstar in Toronto.