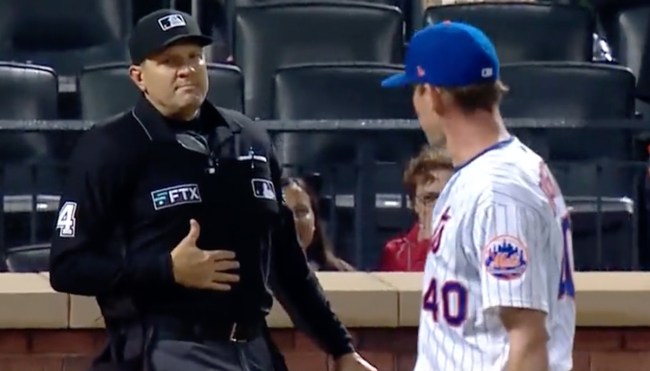 Major League Baseball umpires have not only historically ruled the diamond with an iron fist but (as is the case with most tyrants who answer to almost no one) taken great joy in knowing they are almost always the final authority when it comes to rulings on the field.

While most baseball traditionalists adamantly maintain the “human factor” is what makes the game so great, it’s fairly baffling that we’re still relying on the likes of Angel Hernandez and other incredibly fallible umps to routinely make the correct call despite the ample amounts of technology that would make life a bit easier for everyone involved (well, except for the people that would likely find themselves out of a job).

During Monday night’s game between the Mets and the Braves, we were treated to the latest in a long line of blown strike calls courtesy of Chad Fairchild, who awarded Atlanta’s Dansby Swanson a base on balls after New York’s Chris Bassit appeared to paint the corner on a full count for what would’ve been the final out of the fifth inning.

Bassit was able to escape the situation unscathed, and Fairchild pulled a fairly unexpected move while the pitcher was making his way to the dugout by owning up to the mistake.

In between innings, Chad Fairchild owned up to Chris Bassitt for missing a strike call on Dansby Swanson pic.twitter.com/yPWhnSgymx

Based on the reactions, fans seemed to appreciate the rare gesture.

Classy gesture by Chad Fairchild by motioning “my bad” to Bassitt as Bassitt walked off the mound at the end of the top of the 5th. I have got to give Fairchild a ton of credit for acknowledging his mistake. #MetsTwitter #LGM

Okay…I can't lie…I love that interaction between Fairchild and Bassitt.

The umps have an impossible job…they're trying to call something they literally cannot see. Some are hopeless (cough Angel) but some just make mistakes and own it.

Credit to Chad Fairchild, not sure I’ve ever seen an umpire actually apologize for a blown call while on the field.

Lowkey happy Fairchild said my bad ; nice response from Bassitt too. It's different when folks double down on their bad calls

After the game, Bassit was all class in an interview where he said he also apologized for prematurely walking off the mound and acknowledged the difficult nature of Fairchild’s job before admitting he’s also far from perfect.

Chris Bassitt said he also apologized to umpire Chad Fairchild for "showing him up" by walking off the mound on the missed third strike call on Dansby Swanson:

"I ain't gonna be mad at no umpire, I can tell you that" pic.twitter.com/W8N7EEmodp