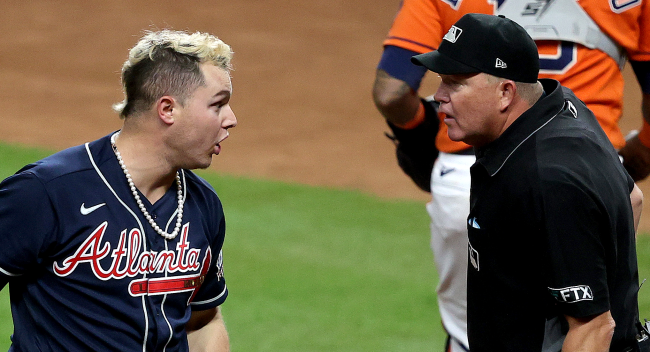 On Thursday, we reported that a survey of 11,500 sports fans revealed some of the changes they would like to see made with Major League Baseball.

Highest on the list were the way the league handles minor league pay and living conditions, broadcast blackouts, and teams tanking.

What we didn’t mention was the fact that 31.9% of those fans also want Major League Baseball to implement an automatic ball/strike system.

Apparently they are tired of watching umpires like Angel Hernandez butcher the strike zone.

According to a massive study of the 2018 Major League Baseball season, MLB umpires made 34,294 incorrect ball and strike calls for an average of 14 per game or 1.6 per inning that year.

So, despite my good friend Grayson claiming robot umpires are going to ruin baseball last year, it is still going to happen.

Major League Baseball (MLB) will be operating the Automated Ball and Strike system (ABS) in select Spring Training venues in Florida, in AAA West and Low-A Southeast, and potentially in other non-MLB games and venues.

ABS will leverage optical tracking data to determine and communicate ball and strike calls to plate umpires. It is critical we provide quality support to the umpires and the technology while capturing data around system performance.

“The ABS Tech will be located at field level to physically support the plate umpire including his device, its functionality, and wiring,” the listing also states. “The ABS application is a simple phone app operated on an MLB-supplied iPhone with a WiFi connection.”

Baseball fans, upon hearing this news, took to social media to express their feelings about this landmark development.

@mlb @MLBNetwork It’s about time, what is next? Robot Baseball Writers' Association of America (BBWAA)? That will be great. At least they will be able to select Hall of Famers by their stats, and not stupid personal issues. pic.twitter.com/iuoCgjTWzv

All for this as a training aide to help umpires hone their strike zone and become more consistent. But the machine taking the place of the ump, not a fan. A bad call every now and then is part of the game…adds to the drama. Don’t replace the Blue!

How about robo players too. Or maybe just an animated version of baseball that we all watch. Or maybe just have 2 owners flip a coin 162 times to determine who wins each game. Problem solved, no bad calls and speedy games. Maybe baseball just needs to be baseball.

Keep the real umpires in the game and have the robot umpire immediately overrule them when they’re wrong https://t.co/MOEZIuxIun

Our robot umpire overlords are coming for you next @MLBUA https://t.co/sjhJ6S448M

I say this could be the end or at the very least the devaluation of the catching position.The lack of a running game has made a throwing catcher less important.A robot umpire makes receiving less important. You’ll just need a big HR guy who can keep ball from going to the screen https://t.co/BOTHQ1lEm3

Just give me any umpires if it means we’ll get baseball this season.

Even if this robot umpire ends up becoming skynet and destroys us all, it will still be better than Angel Hernandez.