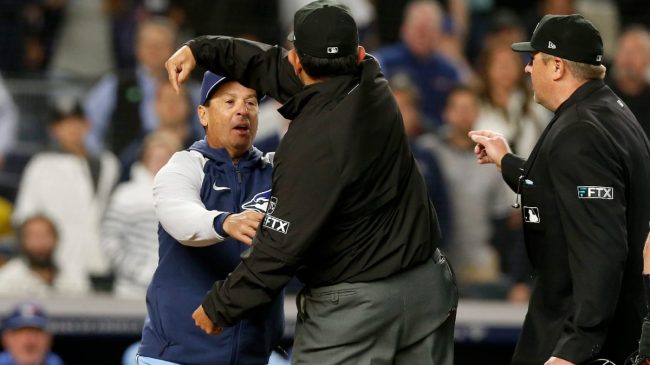 The matchup between the Yankees and Blue Jays was an instant AL East classic.

The game ended with a three-run walk off home run from New York’s Aaron Judge, sending the Yankees home with a 6-5 victory. The win bolstered their lead in the division race as they improved to an MLB best 21-8 on the year.

The contest had fireworks, drama, and a few ejections. Everything you’d want in the perfect baseball game. Unfortunately, those ejections are now being called into question by Toronto fans.

It’s never fun when MLB umpires unnecessarily make themselves a part of the game, but it happened on Tuesday.

In the sixth inning of action, with the game tied 3-3, Blue Jays pitcher Yimi Garcia plunked Josh Donaldson. At first look, it appeared to be a pitch that just got away from Garcia. I mean, you typically don’t want to purposely put runners on base late in a tie game. Especially considering the Yankees already had a runner on first base.

But after an eruption from both the Yankees dugout and the home crowd, umpires gathered for a conference call.

Garcia was then tossed, which caused the pitching coach to storm onto the field. He was quickly ejected, too.

Aaron Judge was ready to pounce after Donaldson got hit and the Blue Jays pitcher and pitching coach get ejected pic.twitter.com/IXKHBAG6T0

This wouldn’t be the end of the drama. Blue Jays manager Charlie Montoyo was tossed an inning later after a Yankees pitcher went up and in on Bo Bichette. Montoyo was wondering why there was no conference call following that pitch.

Blue Jays wonder why Loaisiga wasn't ejected after their pitcher was and manager Charlie Montoyo gets ejected pic.twitter.com/jkKsIqt6PT

Blue Jays fans were not happy, and the fact that they wound up losing in dramatic fashion probably didn’t help. Take a look at the social media reaction below.

Baseball is so ridiculous right now….

First in a tie game in the 6th Yankees players/fans convinced this plunk was intentional.

Then umpires holding a conference to even debate throwing a pitcher out might be more proof they don’t know what they are doing https://t.co/RebSSXWp1U

The umpires tonight at Yankee Stadium were an absolute disgrace. That’s amateur, bush league stuff from that crew. #NextLevel

Umpires were persuaded by Yankee players to get Garcia thrown out. pic.twitter.com/9LX3ceV1AA

Yankees players reactions made this seem like they thought it was intentional. Wonder if that factored into the umpires decision. The pitch didn't look good, but on a 0-1 count with 1 out in a tie game in the 6th, it would be a weird time to intentionally throw at someone https://t.co/aM3Vok1U5G

It certainly seems that the reaction is what persuaded the umpires to eject Toronto players and coaches, especially given the situation of the game. And then, for the Blue Jays’ manager to be tossed after doing exactly what the Yankees dugout did one inning prior made it look even worse.

The machines could be coming sooner than we think.