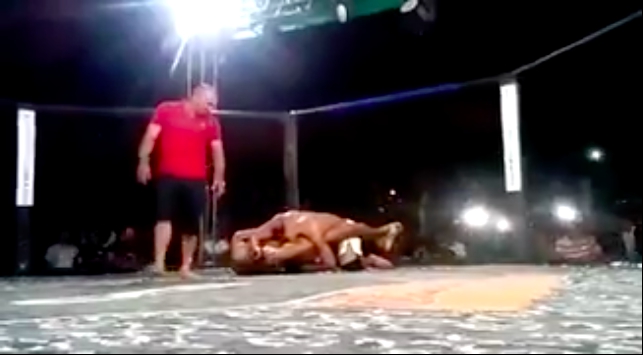 I didn’t write the book on MMA fighting but I can offer this piece of advice to anyone considering going into the officiating field: if one of the fighters has the other in a chokehold for an extensive period of time and his body is starting to go limp, don’t wait for the tap out, call the goddamn.

If you don’t, a cornerman may come in and take matters into his own hands. And that’s exactly what happened during a fight between Silmar “Sombra” Nunes (35-12-1) and Caio “Paturi” Robson Silva (11-9) under Brazil’s Capanema Fight Combat banner.

After Nunes put his opponent in a guillotine choke, he hit the mat and started applying pressure to Robson’s neck from the bottom. Despite numerous attempts by the referee to check on Robson, the referee refused to stop the fight. That’s when a cornerman for Robson Silva leapt into action by breaking up the chokehold and throwing a few haymakers for good measure. Nunes, being a good sport, checked on the status of his opponent even while a melee ensued behind him.

After the fight, Nunes commented about the incident on Instagram.

“P.S: If you don’t tap you’ll go to sleep,” Nunes wrote. “Another win, thank God, I was assaulted at the end of the fight, but everything went OK.”

Robson Silva has yet to comment on the matter, since he is still sleeping.