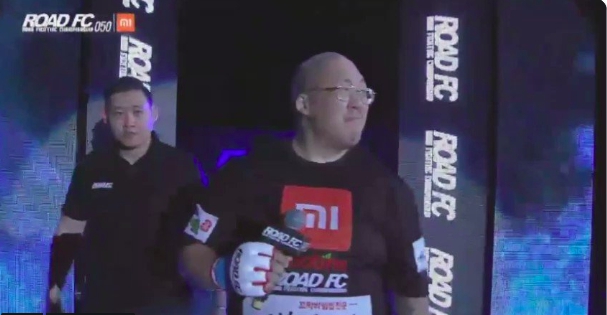 One of my biggest regrets during my tenure as a professional blogger is not including an Imagine Dragons song on my definitive list of The 5 Worst Songs Ever Made. No matter what volume their songs are being played, it always seems like they need to be turned down three notches. I was forced to listen to their latest song “Natural” in full because it was playing at my barber shop, and I was contemplating just getting up from the chair with a 1995 mushroom cut and peace-ing out. I’m convinced that if the U.S. government played an Imagine Dragons album as a torture mechanism, we’d know all our international threats by the third song. Absolutely insufferable.

If you like Imagine Dragons, you’re wrong. But don’t take it from me. Take it from God, who proved it Saturday by way of an MMA fight.

South Korean MMA fighter Heo Jae-Hyuk, who has just two professional fights to his name, was set to take on Gun Oh Shim in a Road FC 50 heavyweight bout. Jae-Hyuk decided to attach a little flare to his name by exiting the tunnel with a microphone belting out Imagine Dragons’ “Believer.”

Jae Hyuk Heo
W or L I am a fan of this guy – he is good pic.twitter.com/2etDmobBQ7

You gotta think that a dude this cocksure is going to secure a victory via first round knockout.

Not the case. Jae-Hyuk was toast in 20 seconds, which in Imagine Dragons terms, is right when the band starts yelling for no apparent reason.

Maybe next fight, Jae-Hyuk can come out singing Ruben Studdard or some shit. Got to go back to the drawing board.