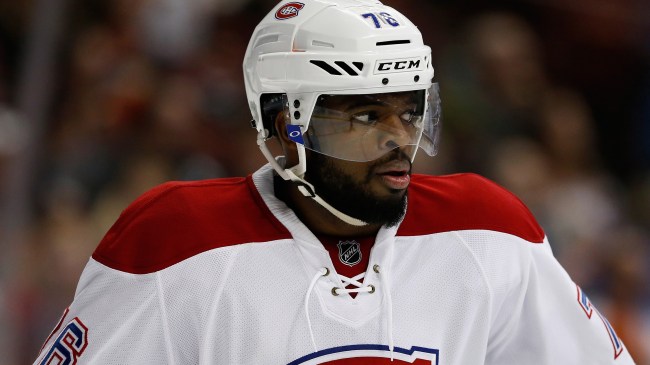 Any player who agrees to sign with an NHL franchise located in Canada does so knowing there’s a very good chance they’ll eventually attract the wrath of members of the country’s notoriously critical hockey media.

The fact that most people who grow up in the Great White North get their first pair of skates as soon as they learn how to walk means hockey is far and away the most popular sport in the country. When you combine that with the lack of competition the NHL faces from other leagues, it’s only natural that media outlets devote a ton of resources to covering the national pastime while catering to some incredibly rabid fanbases.

Reporters in Toronto have a reputation for making life a living hell for Maple Leafs players who fail to live up to the lofty expectations frequently bestowed upon them (just ask Phil Kessel). However, plenty of guys who’ve spent time with the Canadiens would probably argue the haterade in Montreal can be just as potent.

That group likely includes P.K. Subban, who signed an entry-level contract with the Original Six club in 2009 and would spend seven seasons in Montreal before being traded to the Predators in 2016. However, the defenseman (who joined ESPN as an analyst after retiring last year) still has plenty of love for the city where he spent the bulk of his career.

In 2015, Subban announced his goal to raise $10 million for the Montreal Children’s Hospital by the end of 2022. That plan hit a slight hitch when he was shipped off to Nashville the following year, but he was still able to drum up $6.3 million in donations by the end of that self-imposed deadline and has reaffirmed his pledge to hit the original number by the time 2025 rolls around.

However, that apparently wasn’t good enough for François-David Rouleau, the reporter behind the borderline nonsensical story featured on the cover of Friday’s edition of Le Journal de Montréal that tore in Subban for “only” raising $6.3 million for a children’s hospital.

It didn’t take long for plenty of people to take aim at Rouleau and the French-language tabloid for thinking the hit piece was a good idea.

Hold on, people are mad Subban raised *only* 6.3 million dollars, and then he extended his commitment to the children’s hospital in his retirement?

Fake news Quebec media LJDM picking on PK Subban this morning.
PK is a Canadian hero. A Team Canada Olympic Champion who has raised over $6.3 million for the Montreal Childrens Hospital IN QUEBEC even though he's from Ontario.
Disgusting media outlet. Jealous.#Montreal #Subban

Leave it to @JdeMontreal defecate on Subban and the 6,3 million he’s raised so far.
#boycottjdeMontreal

The same media that criticized P.K. Subban as a player will obviously do the same to him as a person.

Then ask yourself, what is it REALLY about, and the answer really isn't that hard to find.

I’m not sure what the journalistic equivalent of a bag skate is, but Rouleau and his newspaper probably earned one with that.