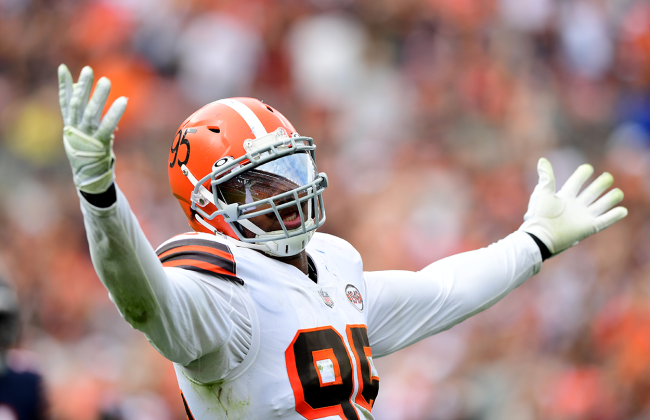 Browns defensive end Myles Garrett is a massive monster of a human being. We know this.

On Monday morning, former four-time First-team All-Pro linebacker DeMarcus Ware posted a hilarious video of him and Garrett in the weight room. At some point during the session, Garrett took his shirt off, which Ware said made him do the same.

While Ware is incredible shape for an almost 40 year-old, he made it very clear that Garrett’s physique is downright insane. The Super Bowl champion joked that when Garrett turns 40, he’ll look more like Ware does today.

Meanwhile, Garrett is in the background of the video look jacked. The almost 300-pound beast doesn’t have a single ounce of body fat on him. From the six-pack abs, to his python arms, to his mountainous traps, he’s all muscle.

In response to the video, Garrett posted on Twitter and said that it’s scary hours, so NFL teams should hide their quarterbacks because he’s coming for them.

If history is to repeat itself, Garrett should expect a “random” NFL drug test in the coming weeks. Back in January, shortly after posting a thirst trap on Instagram, he was selected for a Performance Enhancing Substance test.

If that was the case then, after looking massive on Monday morning, Garrett should be prepared to pee in a cup once again. He is a scary-looking dude.