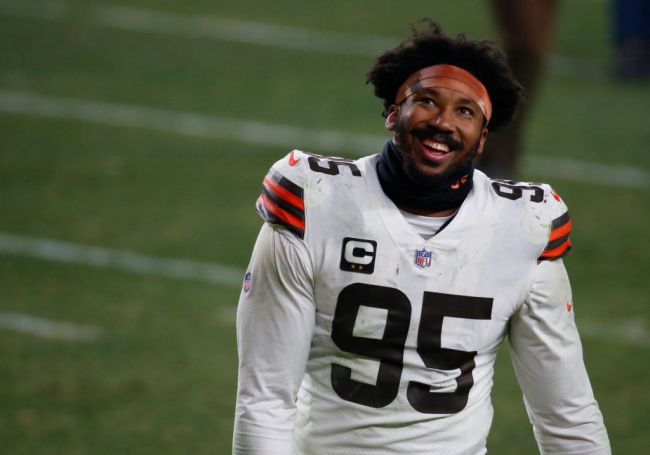 Myles Garrett lit social media on fire last month when a video of him snatching a man’s soul with a posterizing dunk in a pickup basketball game went viral. It was no secret to see Garrett dominate someone like that on the hardwood, but it was still incredible to see. Unlucky for us, it doesn’t sound like we’ll see that sort of highlight from him again anytime soon.

If you see a 6-foot-4, 270-pound defensive end walk into the gym either you join his team or leave the facility altogether, but a couple of guys decided to actually try and guard the human wrecking ball and paid dearly for it.

While social media was hyped to see Garrett put some poor dude on a poster, his employer wasn’t.

During a Wednesday media session, a reporter asked Browns head coach Kevin Stefanski about Garrett and his basketball ‘career’ and quickly explained that Garrett had ‘retired’ from hoops.

Kevin Stefanski on Myles Garrett's basketball retirement: "Congratulations on a great career for Myles. Really proud of him. But he's done." 😄 pic.twitter.com/jInR7X7OJv

Odds are there is some sort of clause already in Garrett’s contract that forbids him from playing basketball like that. Garrett himself most likely knew that, too, but that dunk was simply too good not to post.

Back in 2019, Patrick Mahomes got this same sort of treatment from the Chiefs when they quickly put an end to his basketball playing days as well.