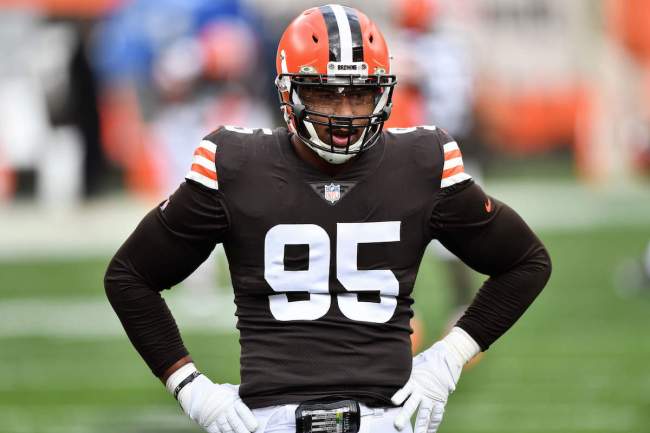 Myles Garrett is one of the premier defensive players in all of football, with the Cleveland Browns’ pass-rusher known for pulverizing offensive lineman and, at least this season, adding in a little strip sack capability into his repertoire. In fact, through nine games this NFL season, the former No. 1 overall pick had totaled 9.5 sacks with four forced fumbles, further proving how dominant he can be.

Unfortunately, following a Week 10 victory over the Houston Texans, the Pro Bowler tested positive for COVID-19, which, per NFL protocol, cost the Defensive Player of the Year candidate two games after being away from the team for at least 10 days. But testing positive and missing a couple games hasn’t even been the worst part of this whole thing for Garrett, because, in the games since returning, stats show just how much it’s still kicking his ass.

According to Jake Trotter of ESPN, Myles Garrett’s stats have been pedestrian since returning to the gridiron after his bout with COVID, with the D-lineman’s sack percentage dropping significantly, while his impact on the games since he’s returning being minimal. Take a look below at some of the stats Trotter tweeted out.

As if the drop in Myles Garrett’s stats weren’t enough, the bullish pass-rusher also briefly mentioned the impact COVID’s having on his body when on the football field, telling reporters after the Browns’ Sunday Night Football game against the New York Giants that he experienced a “coughing fit” in the locker room, and that it’s still difficult to catch his breath after going at such high speeds in bursts.

Myles Garrett said he had a "coughing fit" in the locker room earlier, as he battles since coming off the reserve/COVID-19 list #browns

Myles Garrett: "it's hard to want to make a move or do something that you know is going to expend a lot of energy," on laboring since coming off reserve/COVID-19 list #browns pic.twitter.com/l0NkJVjLY3

While Myles Garrett has remained negative since returning from the initial bout with COVID, the virus is clearly still impacting his play on the field and his overall health. For a 24-year-old pro athlete who’s built like a Greek god, that’s terrifying in many ways, and only goes to show just how scary this pandemic really is.

After everything 2020 brought us, I think Garrett summarized the entire year in one tweet after registering four tackles and a half-sack against the Giants on Sunday night.

Yeah, I’m pretty sure that’s the entire world speaking right now, Myles, not just you. Here’s to hoping the defender can get back to being himself and finally kick any lasting impact from his positive COVID test, because, even without football, it’s just scary to see him still dealing with shortness of breath and congestion all these weeks later.