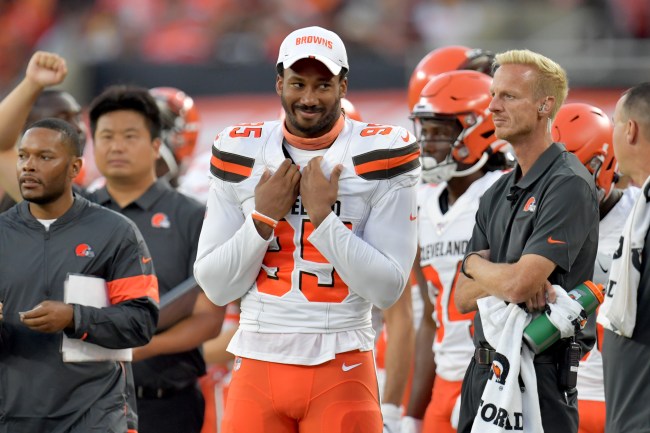 Myles Garrett is an absolute beast. I mean, when a guy who stands 6’4″ and weighs 270 pounds and can be as quick and agile as the former No. 1 overall pick has proven to be, it’s proof that he’s just built differently than pretty much everyone else is. Seriously, how can a person do things like this on a regular basis without having their arms rip out of their sockets?

As cut up as Myles Garrett is, like most great athletes, he’s constantly working on getting better. One of the ways the Cleveland Browns defender did that this offseason was by working out with UFC star (and Cleveland native) Stipe Miocic, who’s set to go head-to-head with Daniel Cormier in UFC 241 this weekend, looking to reclaim the title belt he lost in 2018. Miocic didn’t hold back with the Pro Bowler, putting him through extreme workouts that helped Garrett get leaner and quicker, while building strength in his lower half.

Talking to Ohio.com, listen to how Myles Garrett described the intensity of each workout with Stipe, detailing how fully packed each session was, while also detailing the benefits he took away from training with the UFC superstar.

The sessions, combined with a stricter diet, helped the 2018 Pro Bowl selection lose 10 pounds on the way to what he deems a more comfortable playing weight.

“It was some of the most intense strength workouts that I’ve done,” Garrett told the Beacon Journal/Ohio.com after Monday’s practice at Browns headquarters. “Just being in the ring and having to do those rounds, just being consistent, always being on your toes, making sure that you’re not lacking for a second, it kills your legs.

“But that’s exactly what’s going to happen in a game. The first thing that falls is your legs. Then your mind’s going to go, so you have to make sure that you keep your wits about you, make sure you’re able to retain your information and do what you’re called upon to do.

“I was dropping weight quick during all this. It was very, very intense. Those workouts, they lasted maybe an hour, hour and a half, but the hour was completely full.

“I wanted to make sure that I dropped weight but kept my strength and that I beat up my legs so that they were ready for the grind of the season, that they wouldn’t be worn down by however many plays or however many overtimes we have to go to — hopefully not too many this year.”

For a guy who was already quick off the ball and proved that he could be a dominant defender in the league last season, it sure seems as if Myles Garrett has even higher goals to reach this season and beyond. And, even though he was training with a UFC legend in Stipe Miocic, Garrett made sure he didn’t back down from going mano a mano during different drills.

Garrett called the belt squat machine “the main torture device they used there for me” at Strong Style.

“I’m competitive. So [Miocic] was doing four plates — I have to do four plates,” Garrett continued. “He was doing bands — I have to do bands. I couldn’t do it the same amount of time, but I was like, ‘I’ve got to start somewhere.’ It was just fun to be able to try to match him and compete.”

Who knows if all this beast mode training from Myles Garrett will translate to huge production on the gridiron or not, but Stipe Miocic likes the mentality and constant pursuit from the rising star.

“He just wants to get better. That’s what I loved about it,” Miocic said. “He never questioned any of the things I did. He loved what I did. He just did it, and he was good at it.

“He’s an athletic freak. I call him a specimen. He’s just a good dude, too. I love his mentality.

“He doesn’t take anything for granted. He just works hard. He deserves everything he gets because he’s just such a hard worker.”

With the Browns having huge expectations this season and beyond — which Garrett believes can lead them to becoming the Golden State Warriors of the NFL — fans in the Dawg Pound have to be encouraged by the work the third-year defensive end is putting in to reach those goals.