Find A Friend Like Najee Harris, Who Went To Great Lengths Just To Support Teammates At Alabama’s Pro Day 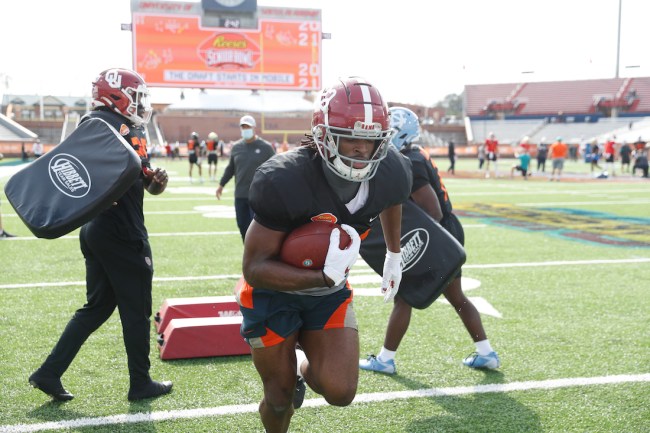 Najee Harris proved to be a beast in the backfield over the past few years for the Alabama Crimson Tide, with the bullish running back racking up more than 3,800 yards and 57 total touchdowns during his time in Tuscaloosa. That type of work helped guide Bama to a national championship last college football season, with Harris having 158 total yards and three touchdowns in the title game against Ohio State.

Given his performances on the biggest stage and having the pedigree of being the featured running back on the Alabama Crimson Tide — which has produced Heisman Trophy winners like Derrick Henry and Mark Ingram, to name a few — it’s no surprise that Najee Harris is viewed as the next great runner from Bama. It’s why he’s projected to be a first round pick in the upcoming NFL Draft, with ESPN’s draft guru Mel Kiper Jr. seeing Harris going No. 30 to the Buffalo Bills in his latest mock draft.

Like a few other players typically choose to do, Harris opted against working out for team’s at the Alabama Pro Day earlier this week. But while he wasn’t running the 40-yard dash or showing his shuttle speed for NFL scouts, he still wanted to be there for one reason: To support his Crimson Tide teammates who were under the pressure in their biggest job interview ever.

Scheduled to fly from Dallas in order to get to the Alabama Pro Day on time, Mother Nature had other plans for Najee Harris, resulting his the running back’s flight being cancelled due to inclement weather. But that didn’t stop the NFL Draft prospect from making a serious effort to show his teammates some love, and actually drove nine hours in order to be present at the Tide’s Pro Day.

Alabama RB Najee Harris’ flight from Dallas to Birmingham was cancelled last night due to lightning, so with no other travel options available, Harris drove nine hours to make it to Alabama’s Pro Day by 10 am today. He’s not even working out today but wanted to support teammates.

In the grand scheme of things, this probably won’t impact where Najee Harris gets chosen in the upcoming NFL Draft. It doesn’t make him more valuable on the field, nor proves that he’s the best player available at his position. But it does show integrity, and proves that he’s a leader no matter the circumstances. Instead of having question marks or red flags surrounding his personality, Harris proved he’s more than just a dominant runner — but actually someone who will do whatever it takes to show love to his brothers. That’s awesome.

I was never necessarily a fan of the running back prior to this, but after hearing his dedication to support his Tide teammates at the Alabama Pro Day, I’m fully aboard the Najee Harris train, and hope the kid has an amazing NFL career. Good guys like this deserve to be rewarded.