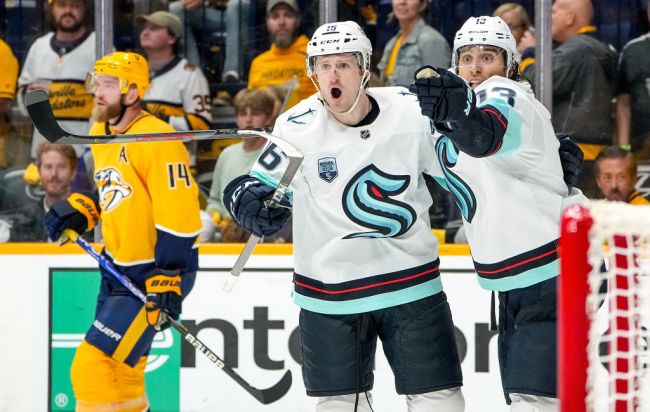 The Kraken have played only two games as an official member of the National Hockey League and have already earned their first win. Seattle traveled to Nashville on Thursday night and beat the Predators 4-3 in regulation.

In addition to earning their first win, the Kraken got into their first fight— both on and off of the ice.

With just over five minutes left in the first period, Seattle defenseman Vince Dunn and Nashville forward Yakov Trenin got after it. The two dropped gloves in the corner and the referees really let them go.

Both guys left bloodied and the crowd was fired up.

Perhaps the fans were a little bit too full of adrenaline, because things started getting chippy, to say the least.

At one point later in the game, a Preds fan in a Filip Forsberg jersey scrapped with perhaps the only Kraken fan in the building. They were both throwing BOMBS.

From one angle, it looks like Forsberg — while losing his pants — seems to have a good handle on his Seattle foe.

Was sent to me from a source tonight. Cannot name said person. pic.twitter.com/OOLTZf8DcO

However, from the other side, it looks like the Kraken fan got his fair share of shots in before Forsberg gets the back of his sweater and takes control. About 10 seconds into the fight, a man wearing a Corona Extra shirt (in October… to a hockey game… so he’s probably a huge weenie…) steps over a few fans and starts chucking knucks at Forsberg.

Five each for fighting pic.twitter.com/gnQxUn3WvK

Amongst the chaos, take note of two characters to the plot.

First, look at the lady in the white sweater with the headband. She could not be less bothered with the brawl and only cares about keeping her drink from spilling.

And then look at the man who comes in about halfway through with the “ASSHOLES LIVE FOREVER” shirt who comes in and tries to break it up. Not only is it an incredibly wild shirt to wear in public, but by trying to stop two (likely) assholes from fighting, is he not going against the principle of what he is wearing?

Welcome to the NHL, Seattle Kraken.