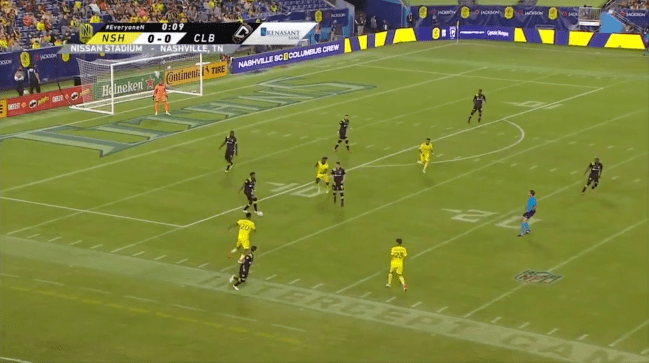 Monday Night’s football game between the Buffalo Bills and Tennessee Titans was one of the best this season. The back-and-forth matchup between AFC powerhouses came down to the final 22 seconds in front of a sold-out crowd that was one fan short of the perfect number.

Prior to the final kneel down by Ryan Tannehill, the visiting Bills faced a difficult decision.

Down by three, with the ball, head coach Sean McDermott had to decide whether to attempt a 4th-and-1 at the Tennessee 3-yard-line or to kick a field goal and send the game to overtime. He chose the former.

Josh Allen took the snap and ran a quarterback sneak up the middle. He seemed to lose his footing and fell to the turf short of the first down line.

The turnover on downs ultimately cost Buffalo the game and gave them their second loss of the season.

Two nights later, a Nashville soccer broadcaster decided to fire shots at the Bills over the failed 4th down during the game.

Nashville Soccer Club, which plays out of Nissan Stadium on the same field as the Titans, was playing Columbus on Wednesday night. With the field still marked for football in addition to the soccer boundaries, MLS commentator Tony Husband saw an opportunity and took it.

As NSC and the Crew handled the ball in what was the Tennessee half during Monday’s second half, Husband aimed at the Bills and fired.

He joked about how that side of the field was not a good place to “slip up” and added “just ask Josh Allen.”

It was ruthless, take a listen:

It would be a fair guess to imagine that Husband had the quip in his back pocket, because he broke it out during the first minute. He was locked and loaded from the get-go and took the chance as soon as he could.