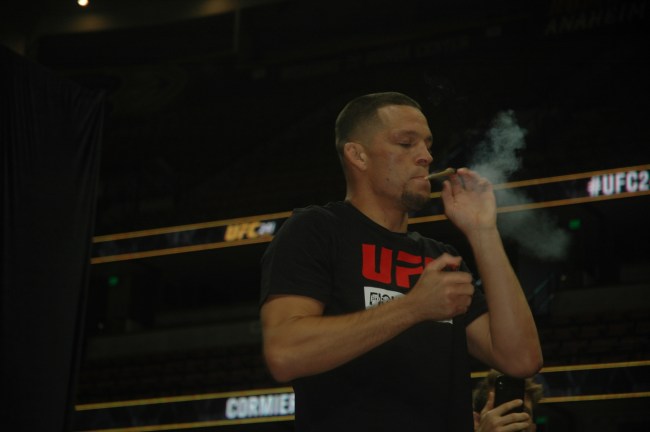 Leave it to Nate Diaz to spark up some instant controversy on the first day of UFC 241 fight week.

Lighting up a fresh cone of CBD flower at the Honda Center, Diaz closed out the open workouts with some shadow boxing, movement drills, and words for his upcoming opponent, Anthony Pettis.

Still, the focus remained on his Game Up Nutrition product line, which remains fair game under the rules of the California State Athletic Commission.

“I’m the Don of all this,” exclaimed Diaz after his workout. “Didn’t no one read the blueprints right there. I’m like ‘it’s right there.’ Why didn’t you go take it? And nobody did.”

Diaz first shone a spotlight on CBD use after his last fight, a five-round war against Conor McGregor at UFC 202, vaping a pen at the post-fight press conference. So great and immediate was his impact on mixed martial arts that not only did many state athletic commissions change their stance on cannabidiol, but the UFC recently announced a sponsorship with Aurora, and the United States Anti-Doping Agency has loosened its grip on CBD in competition.

With other professional sports leagues like the NFL, NBA, and MLB reconsidering their stance on CBD, the UFC and MMA are looking like trailblazers for professional athletes around the world. And behind this major sports movement is Diaz, one of the greatest trash talkers in the history of mixed martial arts and the inventor of the Stockton slap.

While Diaz passed his joint to the crowd (to be clear, he extended the invite to partake to BroBible first, before passing the Dutchie to his fans), the UFC 241 open workouts weren’t all about puffing and burning.