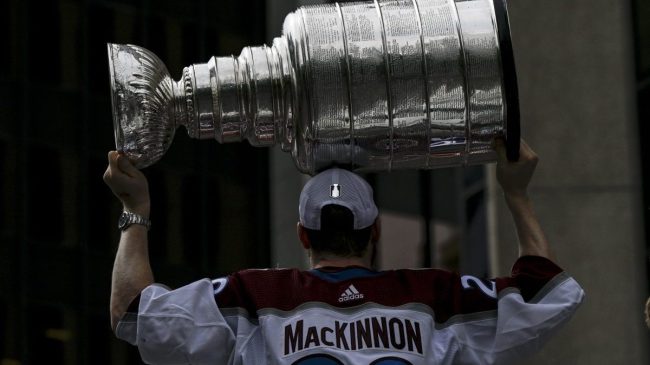 Things are going pretty well these days for fans of the Colorado Avalanche.

The Avs won their first Stanley Cup in 21 years this past season and finished second in the race for the Presidents’ Trophy with a Western Conference-leading 119 points.

That comes a year after Colorado won the trophy in 2020-21 before a disappointing playoff runs.

But now the Avs are moving full-steam ahead and there are no signs of slowing down. 23-year-old defender Cale Makar won the Norris Trophy as the league’s best defenceman and the Conn Smythe as the most valuable player in the playoffs. While 27-year-old Nathan MacKinnon is in the discussion for the league’s best player, having averaged more than a point per game in each of the last five seasons.

MacKinnon appeared set to enter the 2022-23 season with just one year remaining on his contract. But ESPN’s Ryan S. Clark reports the two sides have agreed to a new contract that makes the Avs’ star the highest-paid player in NHL history.

Nathan Raymond MacKinnon, the first of his name, the warden of Nova Scotia and the defender of the Rocky Mountains, just got paid.

Starting next year, he will be the highest-paid player in the game after signing an eight-year contract. #Avs https://t.co/bL2QEk4EHJ

“MacKinnon and the Colorado Avalanche agreed to an eight-year, $100.8 million extension that will carry a $12.6 million AAV, sources told ESPN, confirming multiple reports. It is a deal that will see MacKinnon sign the richest contract in the salary cap era. His new deal sees him overtake Edmonton Oilers center Connor McDavid for the top spot by $100,000 with McDavid’s AAV being $12.5 million.”

Hockey fans were taken aback by the eye-popping number. But most everyone agreed that MacKinnon is worth every penny.

GET THAT BAG SLAYTHAN MACKINNON

MacKinnon cashing in and worth every single penny. This is how he will be walking into the Avs locker room pic.twitter.com/1yRU6cUpTx

The Avs now have their core of MacKinnon, Makar and captain Gabriel Landeskog locked down for the foreseeable future. Their dynasty could be just beginning.