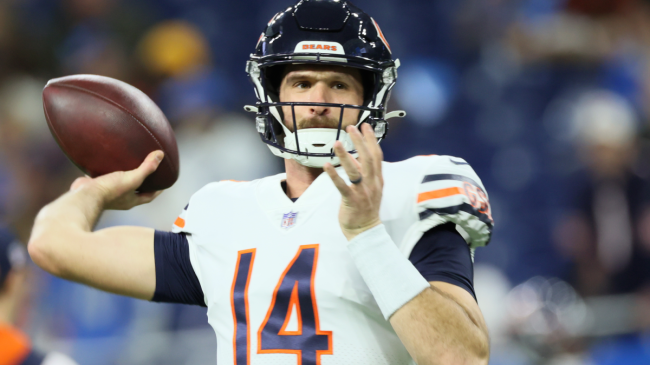 Nathan Peterman is back in a starting lineup. The veteran passer will be under center for the Bears on Sunday as they wrap up their regular season.

Nathan Peterman’s seen action before, but most remember him for all the wrong reasons. He famously threw five first half interceptions in his NFL debut, leading to fans posting his “lowlights” in past seasons.

Things got so bad that Bills supporters once started a GoFundMe to raise enough money to convince the signal caller to retire.

Peterman spurned those fundraising efforts and he’s since moved on to a reserve role in the Windy City. Now, to many Bears fans dismay, he’ll make his first professional start since that ’18 campaign.

The reaction on social media has been great.

Justin Fields has been ruled out this week. Nathan Peterman will start. What a time to be alive

Another hilariously said, “I’m so glad Nathan Peterman will be added to the lengthy list of starting Bears QBs since Super Bowl XX.” That list is a long one and includes players like Matt Barkley, Kyle Orton, and Josh McCown.

At 3-13, the Bears are in contention for the No. 1 overall pick in the upcoming NFL Draft. Maybe there’s a strategy in starting him under center.

A Nathan Peterman sighting!!! This is also known as tanking to try and get the No. 1 overall pick! https://t.co/q4hXuNvvi4

At least one fanbase is happy, and that’s that of the Bears’ upcoming opponent. There’s no way the Vikings can lose to Chicago this week… Right?

Nathan Peterman is 1-3 in his four NFL starts, and he’s compiled just three touchdowns to 13 interceptions on 52% passing. If things go the way many believe, Chicago’s chance at a top draft pick increase drastically.