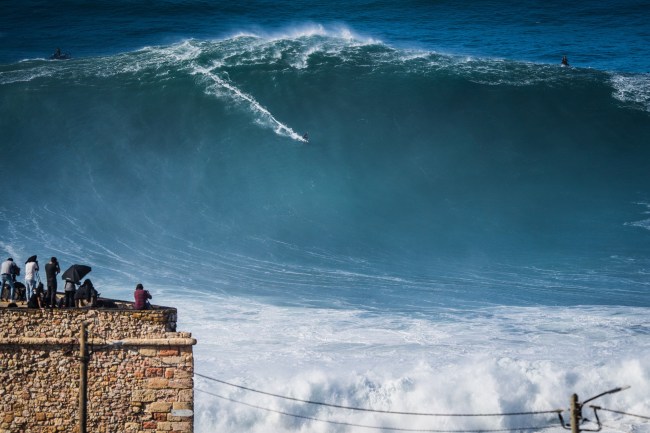 The tiny fishing village of Nazaré, Portugal is home to the largest Big Wave Surfing waves on the planet when the weather is right. It’s the location where the world record has been set, broken, and set again for the largest wave ever surfed.

These Nazare waves usually fire at their biggest during Winter storms but they’ve been treated to a late-October storm that’s created some of the largest waves the surfing world has ever seen. The storm is named Hurricane Epsilon because there were so many named storms this year they ran out of actual names and had to move to the Greek alphabet.

A ton of clips from Nazaré has surfaced over the past day with surfers like Andrew Cotton charging waves. He famously broke his back at Nazaré back in 2017 but made it back to pro surfing the next year and has since become an excellent advocate for big wave surfing safety on Instagram. He’s a great follow on IG if you’re not already following him (@andrew_cotty). Cotton said his goal yesterday was to catch only 1 wave and MY GOD did he succeed.

I only really wanted 1 wave today, I was happy to wait and I knew it was going to be a right just out straight in front of the lighthouse. Definitely the fastest I’ve ever been on a surfboard ! Thanks @mcnamara_s for the inspiration and encouragement, @whitewaterwilly for safety @masonhycebarnes for back up and @mamaunearthed for the calm and collective radio calls 🙌🏽❤️🙏🏼🌊 . 🎥 @leopoldocastro . . . . #nazare #bigwave #surfing #surf #wave #bigwaves #surfer #waves #bigwavesurfing #surfboard #bodyboard #surfinglife #barrel #surfingboard #ocean #surfergirl #wsl #surfers #surftrip #photooftheday #beach #surfsup #surfporn #kookslams #surftime #surfculture #slam #kook #slams #bhfyp

The World Surf League (@WSL) was posting a ton of Instagram clips yesterday as well. Here are a few of those along with a YouTube clip from their channel of this wild action at Nazaré:

While everyone else was focused on Nazaré, @conormaguiree caught what some are calling the biggest wave ever surfed in Ireland. 🇮🇪 Read more, link in bio. Video: @clemmcinerney

Here’s some more wild footage from YouTube which really gives you a sense of how Nazaré is set up. It’s truly a geological phenomenon with the waves breaking so close to shore you can sit on land and watch the action. And the canyon underneath the water is situated in a way that the swell builds way out in the Northern Atlantic in incredibly deep water and pushes towards Nazaré before the canyon comes to an abrupt end and creates a massive wave right there on the shore.

That plus a hurricane leads to waves the size of skyscrapers and those were on full display yesterday thanks to Hurricane Epsilon.

Because this is a hurricane swell the waves won’t last as long as you might see with a slower-moving weather system but we’re on the doorstep of Winter and that means Winter storms will be firing at Nazaré any day now so more of these skyscraper-sized waves are on the horizon.