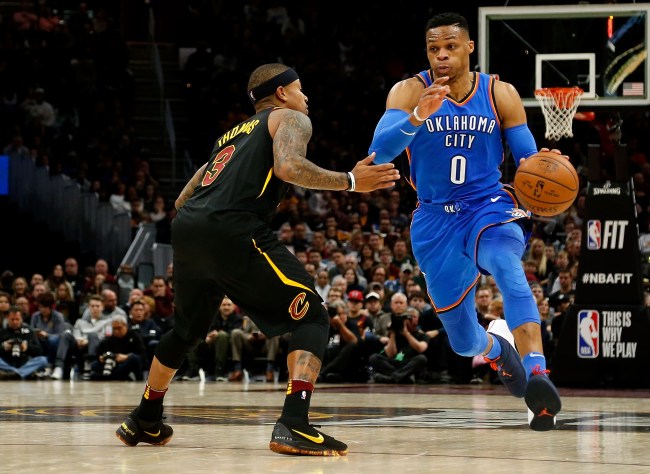 The first ever NBA All-Star draft, if televised, would have produced content, drama, and storylines for weeks. Instead, the Players’ Association nixed television the event in part due to the humiliation a player would feel if picked last. Mind you, these dudes are 24 of the league’s best players. And multimillionaires.

The Players’ Association also reportedly didn’t want to put captains LeBron James and Steph Curry in the precarious position of choosing other players over teammates. The PA isn’t fucking around with this whole ‘protect the players’ initiative.

In any event, both Curry and LeBron have picked their respective teams, and they are very well matched.

As drafted by #NBAAllStar team captains #LeBronJames and #StephenCurry….

As you can see, Russell Westbrook is at the bottom of Team LeBron. Westbrook took that as an indicator that he was picked last, like Stephen Glansburg.

Russell, as we know, takes things personally. That could be why he went out and scored 46 points last night in a win against the Wizards.

When asked about how he feels about his All-Star team after the game, Westbrook said the following.

Russell Westbrook asked his thoughts about being picked on LeBron’s team, thought he was the last pick. Informed it was just an alphabetical list, he made sure to correct Melo who was heckling nearby. pic.twitter.com/gPMgPr91Kz

“That’s cool, man, that’s good, man, they finally got the teams figured out,” he said. Then from his nearby locker, Carmelo Anthony yelled out, “Tell ‘em how you really feel!”

“But I see I was the last pick on the list — I was just trying to figure out how …” Westbrook said, referring to a list tweeted out by James.

Russell is primed to score 193 points in the game.