If These Leaked Pics Are The NBA All-Star Unis, The League Should Go Ahead And Just Cancel The Game 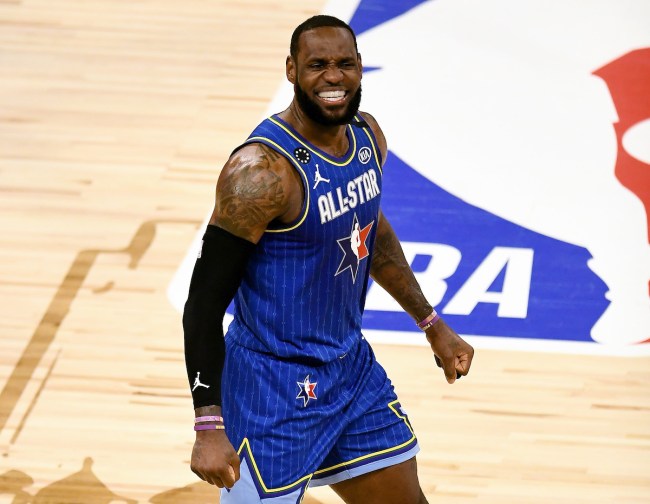 The NBA All-Star Game is this weekend, and while lots of players have voiced their disappointment about the exhibition even being played — as well as the Mayor of Atlanta, where the event will be hosted — the league is sticking by the idea that this needs to happen. Forget the fact that it’s still a pandemic and nobody really needs to watch a defense-less hoops game with the biggest stars in the league, because the NBA is going through with this in order to appease sponsors and make a little extra cash.

Look, that’s a fair argument given the lost revenue after a shortened season last year because of the pandemic, but instead of putting on this pointless event, why not just give teams the weekend off and use it as a siesta-type of pause in the regular season, allowing players to recharge? That’s just my opinion.

Anyway, after the NBA All-Star festivities got moved from Indianapolis to Atlanta for a number of different reasons, it seems as if the league got lazy AF and just decided to keep the uniform designs intended for Indy. At least, if these leaked images are accurate of the uni designs, that’s what it appears like.

REPORT: These are reportedly the 2021 NBA All-Star Jerseys, via @camisasdanba. pic.twitter.com/534ffLnuej

Clearly these look like Indianapolis-focused designs, right? The yellow and blue represents the Pacers’ colors, and, in fact, the entire design sort of resembles the old school jerseys of the franchise from years back. Take a look below at the comparisons between the two.

The reason I wore #23 in HS and College and the reason I became a @Pacers fan in 1985, and still am today.
RIP #23 – Wayman Tisdale pic.twitter.com/weOkISbzrG

But here’s the thing: The NBA All-Star Game is being played in Atlanta, so, assuming these uniforms are the ones players will be wearing, they don’t make much sense. That’s all without any mention yet of the hideous design here, with way too many shapes happening on one jersey. Just keep it simple, man!

Looks worse than the girl I lost my virginity to

Ones on the left look like a McDonald’s wrapper lmao

EWWWWW WTF IS THAT

LMAOOOOO WHAT THE FUCK. The game and the activities are already trash so this is just the cherry on top pic.twitter.com/96f1GstKYy

These designs were waay better and creative repping your own team at the same time💯💯💯💯 pic.twitter.com/bv93u1WWcv

The NBA All-Star Game is fun during a regular year, but this year it’s already sort of gone sour. Of course, that may change once players arrive in Atlanta and start hanging out, bringing an energy fans come to expect. Regardless of how it all goes, the apparent uniforms both teams will be wearing sure won’t induce many smiles among the players — because they’re pretty damn bad.