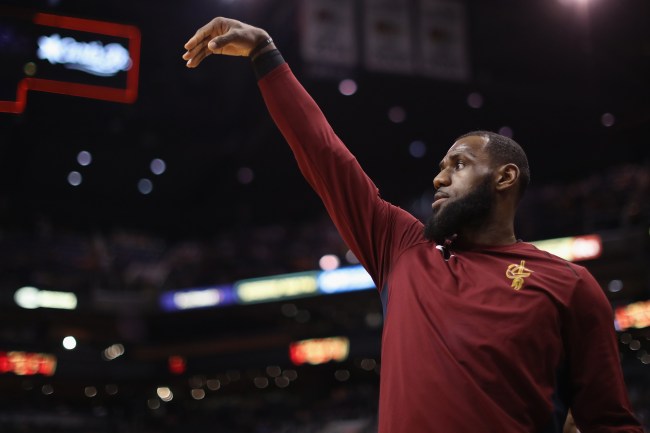 PHOENIX, AZ - MARCH 13: LeBron James #23 of the Cleveland Cavaliers warms up before the NBA game against the Phoenix Suns at Talking Stick Resort Arena on March 13, 2018 in Phoenix, Arizona. The Cavaliers defeated the Suns 129-107. NOTE TO USER: User expressly acknowledges and agrees that, by downloading and or using this photograph, User is consenting to the terms and conditions of the Getty Images License Agreement. (Photo by Christian Petersen/Getty Images)

The NBA is experimenting with giving fans the ability to live stream the 4th quarter of out-of-market games, through the NBA League Pass app. The in-app micro transaction ($.99) gives fans an easy and affordable way to catch crunch-time of a close game; historically, fans who wanted to watch the last few minutes would have been forced to pay the cost of a full out-of-market broadcast ($6.99). The NBA has not officially announced the launch of the service and it currently remains available on an invitation only basis. There is no word on if there will be an additional charge to stream overtime.

Howie Long-Short: Adam Silver talked about fans “paying a set price for five minutes (presumably the last 5) as opposed to what they would pay for two hours” 2 years ago at CES, so this experiment didn’t exactly come out of the blue. I’m expecting micro transactions to move the needle for the NBA, so naturally the rest of pro sports will follow with their own versions. Some are concerned the newest offering will cannibalize the League Pass subscription base, I don’t foresee that happening. Hardcore fans are still going to want the entire game. I see micro transactions as a new revenue stream for the league, targeting the casual fan that otherwise would not be paying for league content.

Fan Marino: Don’t pay to watch a Warriors game expecting to see Steph Curry (or several other stars), for the next several weeks. Curry has a Grade 2 MCL sprain, an injury expected to keep him out at least 3 weeks. If he remains on schedule, he should be available for the start of the playoffs. Curry is just the latest Warrior to go down; Draymond Green has been suffering from a bruised pelvis, Kevin Durant out with a broken rib and Klay Thompson has been on the shelf with a fractured right thumb. Coach Steve Kerr recently joked (I think) “hopefully, we’ll have 5 guys that can suit up by the playoffs.”

Index Fund for the Sports Fan

SportsETFs launched a Pro Sports Sponsors Index (FANZ) during the ’17 MLB all-star break, consisting of 66 companies that are official sponsors of the 4 major sports leagues; today that figure is up to 67. Nick Fullerton is the man behind index fund and JohnWallStreet had the chance to connect with him late last week to discuss what it is about pro sports sponsors that makes them attractive from an investment standpoint.

JWS: Who is investing in this fund?

Nick: We designed this index to provide a general investor, a sports fan and a financial advisor with a product they can intuitively get. This gives them a vehicle to invest in something that they know.

JWS: Can you discuss the methodology behind selecting names for the index?

Nick: It’s rules based product, so we’re not doing any stock selection on our end. You must be an official partner of one of these core four sports leagues. The leagues are essentially doing the vetting and stock picking for us when they enter one of these multi-year agreements. You must be publicly traded on one of the major U.S. or Canadian stock exchanges and the index is equally weighted.

JWS: What is it about corporate sponsors of pro sports leagues that makes them an attractive investment option?

Nick: If you look at the companies that partner with the league, they are typically blue-chip companies that still want to grow (think: DIS, AMZN, BRK.A); so, they’ve got a growth component but, they’ve also got a value component in that they have enough free cash flow to earmark a big chunk of their marketing budget to sports. They’re typically strong cash flow, well-known brands. These are companies that want to market and sell to a loyal, dedicated and passionate community of customers – there is no other group or medium that brings so many people together for these brands.

Howie Long-Short: How was the fund performed?

Note: The fund trades under the symbol FANZ on the BATS exchange.

Fan Marino: Investing > Gambling. On Saturday evening, Michigan played Florida State with a spot in the Final 4 on the line. Down 4 and with 10 seconds remaining, Florida State chose not to foul allowing the clock to expire. Coach Leonard Hamilton said after the game that the reason he chose not to foul was because “the game was over”. Despite Hamilton’s belief, it wasn’t over for Florida State (even with 2 FTs, it’s only a 2-possession game) and it certainly wasn’t over for gamblers who had Michigan -4.5. Tough loss.

PNC Bank (PNC) has signed on to become the “Official Bank of NASCAR” and “Official Wealth Management Partner of NASCAR”, agreeing a 5-year; its first partnership with a sports league. Looking to establish a stronger national brand, PNC will be present at races throughout each season; offering services and insights to drivers, teams, tracks and sponsors. The Fortune 500 company has also joined NASCAR Fuel for Business Council, a group of 50+ official sponsors that buy and sell products from each other. More than 25% of Fortune 500 companies are currently invested in NASCAR, a +7% YOY increase from 2017.

Howie Long-Short: 2017 was a strong year for PNC (and its shareholders) as the company reported net income of $5.4 billion ($10.36 per diluted common share) and returned $3.6 billion in capital to shareholders, a 17% YOY increase. PNC increased loans, deposits and customers for FY17, while generating record fee income. CFO Rob Reilly said he expects to “deliver positive operating leverage” in 2018.

Fan Marino: Sunday’s NASCAR Cup race at Martinsville Speedway was postponed until 2p today because of inclement weather, a particularly rare occurrence. Atlanta 1993 was the last time a race was postponed due to snowfall. Heavier than expected snowfall Saturday evening forced NASCAR to make the safety driven decision. With no time for qualifying, drivers will line up for the start of the race in order of team owner points.