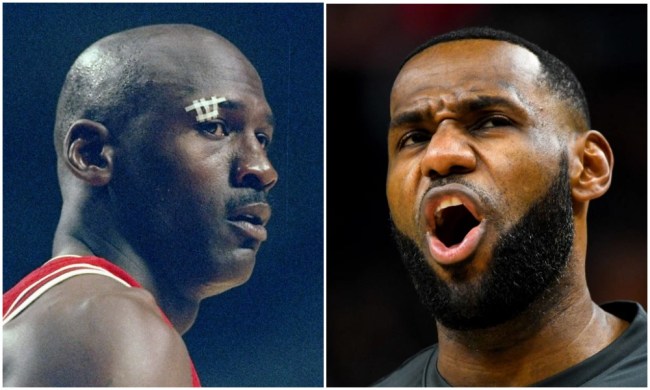 Whether we like it or not, the LeBron James vs. Michael Jordan debate is basically a part of any sports fan’s daily routine at this point. Given the fact that SportsCenter has shoved the argument down our throats for nearly a decade now, it’s honestly hard to imagine life before the James vs. Jordan debate wasn’t talked about into exhaustion. Then, with ‘The Last Dance‘ taking over our lives over the last handful of weeks, the GOAT argument has gotten even more intense.

With most of the sports world still on pause, ESPN has covered the argument in every way imaginable, but their latest project may be the most controversial.

According to an NBA fan poll that the network commissioned, 73% of the 600 respondents believe that Jordan is the better player in every category imaginable.

Obviously, 600 respondents aren’t a huge number, but it’s still a significant one. The biggest argument you could have against a random, 600 person poll would be the age gap between respondents given the two players played in different eras, but ESPN thought of that too. People were split evenly into two age groups: 18-34 and 35 and older. Jordan dominated the older age group receiving a 79% advantage, but even in the younger group, Jordan took 66% of the votes.

There were a total of 17 questions asked to each respondent and Jordan swept every single one of them.

These were some of the more interesting questions the poll asked:

As you can see, the poll wasn’t close in any category, Jordan absolutely dominated James.

When it comes to the all-important question of who the GOAT is, we all know the answer will be up to debate forever, but this particular poll showed that 65% of people believe MJ is the greatest of all time.