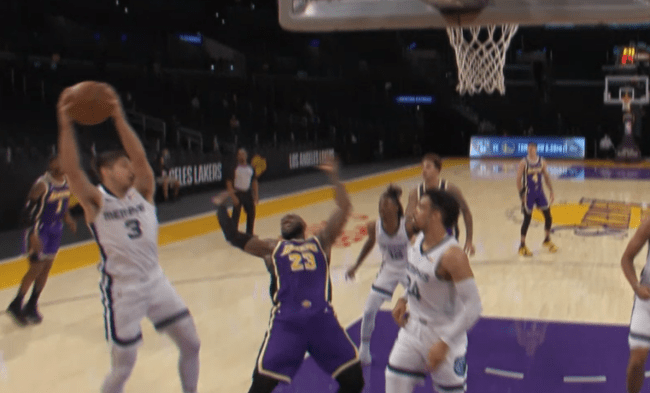 There’s a good chance LeBron James gets a fine from the NBA over his latest flop.

Throughout his career, the NBA’s biggest superstar has been accused of overacting to sell calls by fans and players alike. LeBron once infamously told a reporter that he’s doesn’t flop after being called out by Bulls players.

“I don’t need to flop,” James said. “I play an aggressive game. I don’t flop. I’ve never been one of those guys.”

LeBron is obviously lying because he gets accused of flopping on a nightly basis. On Friday night, LeBron flopped so hard vs the Grizzlies on Friday night that he got crushed by the announcers calling the game.

Grizzlies broadcast is fed up with LeBron’s flopping pic.twitter.com/f0dzTmnPBv

Flop of the Year candidate.

Fans went on to blast LeBron for his latest egregious flop.

NBA refs are an absolute travesty. All of em should be put on plan and trained for 5 years straight before getting a job. Awful all season. https://t.co/PQovo4mexk

I defended LeBron so many times, I can't with this one 🤣 https://t.co/zuhSHW1tkT

Really? @NBA get this crap out of the game https://t.co/q9vlM1yVQ8

i got a gut feeling space jam 2 is gonna have some great acting https://t.co/woxaJiMa2W

This is just lame @KingJames