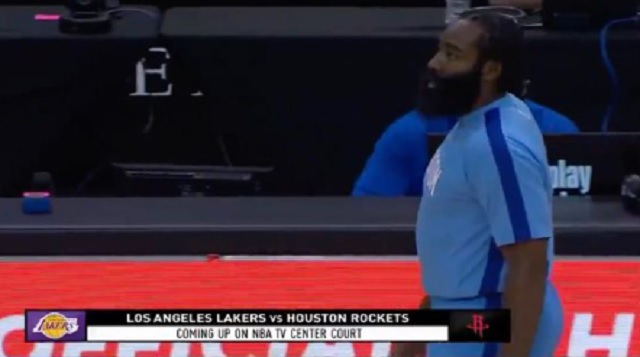 Disgruntled NBA superstar James Harden has had an odd season.

While the Rockets guard has asked to be traded out of Houston it seems like the Rockets are planning on keeping him for the entire season.

Front office executives around the NBA say Houston is growing more confident that Harden will be content to stick around at least through the rest of the season. Sources say Harden still prefers to be dealt, and losses like Sunday’s 18-point defeat to the Lakers won’t help Houston’s case. But Harden himself expressed optimism for Houston’s future on Saturday, telling reporters, “As long as we continue to find chemistry, we have a chance to do something special.”

While attempting to get traded it appears that Harden hasn’t gotten himself in shape. On Tuesday night, a video of a hefty looking Harden went viral on Twitter after the announcer on NBA TV made a snarky comment.

james harden about to drop a 40 point triple double after hitting the buffet pic.twitter.com/mPIvnftnEX

Harden lookin like somebody’s uncle at thanksgiving ready to drop 30 on his nephew 😂😂 #Rockets pic.twitter.com/2ERLC6l5EI

James Harden and I have the same body shape. But he’s richer than me so he can get away with it. https://t.co/jepS7xnka6

There are 14 Torchy’s Tacos in Houston. Can you blame James Harden? pic.twitter.com/t1nGZ3ARre

james harden eating rib plates before games until they trade him 😭😭😭 pic.twitter.com/MxAWe79j0S