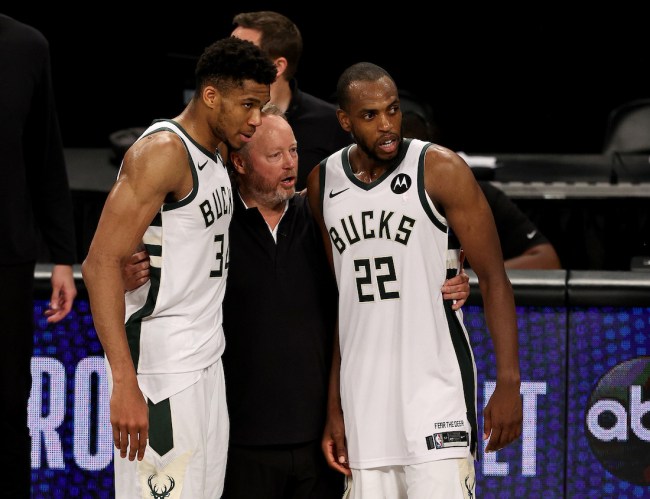 Anybody who’s watched the NBA Finals so far probably hasn’t been too impressed with the Milwaukee Bucks‘ performance to this point. Finding themselves in a 2-0 series hole, the Eastern Conference champs have looked overmatched in every facet of the series against the Phoenix Suns, and haven’t necessarily made adjustments to try and cause some matchup problems. Those could come, but, thus far, it seems like this series could already be over.

Sure, the Bucks have a two-time league MVP in Giannis Antetokounmpo leading them. They have the next two games at home in front of their fans. They have yet to get two complementary stars, Khris Middleton and Jrue Holiday, going in the series yet. But they have zero room for error as Game 3 approaches on Sunday.

Relying too much on Antetokounmpo, Milwaukee’s gameplan seems, well, nonexistent at the moment. The Suns are playing off Giannis as he dominates the ball offensively, clearly daring him to shoot threes — which he’s been bated into taking. If there’s one way to slow down the “Greek Freak”, making him shoot is it.

Considering the lack of adjustments by the Bucks thus far, ESPN’s Kendrick Perkins isn’t sugarcoating his opinions on the team. In fact, the former NBA player went as far as saying they’re the “dumbest team” in NBA Finals history while on Get Up on Friday, adding that the Suns’ basketball IQ is the best in Finals history.

The Milwaukee Bucks are the Dumbest Team in Finals History!!! The way that they play the game of basketball is beyond disturbing to the viewers eyes. Carry the hell on… pic.twitter.com/nyPaQ8aE41

Perkins’ claim may be bold, and it’s sure to piss off plenty of Milwaukee Bucks’ fans, but is he actually right? At the moment, it might not be that far off.

Look, there have been tons of overmatched teams in the NBA Finals over the years. We’ve seen sweeps. We’ve seen questionable decisions. So maybe declaring the Bucks the dumbest team to ever play in the series is a little bit excessive.

Plus, it’s not like the series is over yet. With at least two more games left before the Suns are crowned as champs — both of which are in Milwaukee — the Bucks have the opportunity to hold steady and protect their home floor. But if Phoenix wins Game 3, it’s a wrap.

To prevent that from happening, the Bucks’ head coach, Mike Budenholzer, needs to adjust his strategy. The players need to start playing as a unit, and not just standing around watching Giannis Antetokounmpo play hero ball. It might work in a quarter to overcome a 10-point deficit — as it did in Game 2 — but that’s unsustainable for an entire game.

How Can The Bucks Get Back Into These NBA Finals?

Kendrick Perkins played in the league and knows all about basketball IQ. He understands what it takes to win a championship. So hearing him say the Milwaukee Bucks are the dumbest team in NBA Finals history carries weight. Add in the discrepancy in coaching tactics between Budenholzer and his counterpart, Monty Williams, and it’s easy to understand why Perk thinks so little of the Bucks right now.

But things can change in a hurry in a NBA Playoffs series. Should the Bucks win Game 3, they’re back in the series. If they’re able to win both home games, it becomes a best-of-three — and we all know a playoff series doesn’t start until a road team wins. That has yet to happen.

Taking the ball out of Antetokounmpo’s hands and allowing Jrue Holiday to command the offense could be effective. Running Khris Middleton off screens could be a way to get him more involved. Playing a smaller lineup that can shoot more proved effective towards Game 1, so maybe that’s the answer? Because, right now, it looks like the Suns are playing chess and the Bucks are playing Connect Four! That’s how dumb some of the gameplan has looked, with Budenholzer lacking any sort of creativity mid-game to give his team a chance in this NBA Finals.