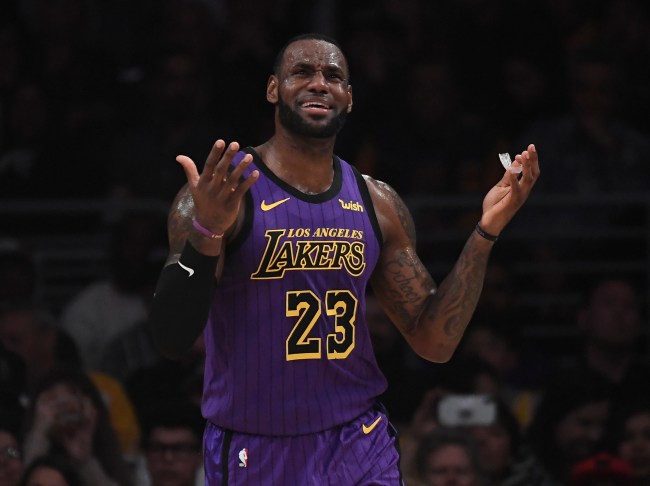 NBA free agency is supposed to be the time of year when teams overspend on players in the hopes of competing for championships. We’ve seen it with the Golden State Warriors when they signed Kevin Durant to a deal back in the summer of 2016. We saw it with the Cleveland Cavs do it in the summer of 2014 to bring back LeBron James. And, well, we’ve seen it on less successful franchises who pay lots of money to retain talent by offering them max and supermax deals.

With lots of money to spend this summer — two max contract slots, to be exact — the Los Angeles Lakers are expected to make a run at some of the top free agents on the market. Names such as Durant, Kawhi Leonard, Kyrie Irving and Klay Thompson have all been linked to the Lakers at some point, with people assuming they all want to play against James in the hopes of competing for championships. While Lakers fans may hope for one of the big fish to come to LaLa Land, ESPNs Brian Windhorst is quick to shutdown such optimism.

Speaking on SportsCenter earlier, Windy detailed why those top four names might not be interested in joining LeBron James and the Los Angeles Lakers, stating that they’ve all got championship rings, so they don’t need to validate their legacies. Windhorst also pointed out that, because of that, the famed franchise may only be a “backup plan at best” for second-tier free agents like Kemba Walker and Jimmy Butler, adding that it just isn’t a good year for the Lakers to have so much money to spend this offseason. Take a look at the video below, which I tweeted out.

.@WindhorstESPN saying the #Lakers are “going to be a backup plan at best” for SECOND-tier free agents shows how much guys don’t wanna play with LeBron for some reason. pic.twitter.com/D5jMnle7kR

This all comes on the heels of LeBron James saying that he’s committed to recruiting other superstars this summer to join him on the Lakers during NBA free agency, which is something that he’s previously said, too. Will this year make a difference? Who knows. But, according to Brian Windhorst, James and the franchise may be gearing up for a letdown if they think one of the top names is headed to L.A.

As SportsCenter anchor Sage Steele points out at the tail end of the video above with Windy, LeBron James’ reputation sure seems to have changed amongst his peers over the past 10 months or so. While he was never really able to convince a star to join him in NBA free agency while in Cleveland, with the dysfunction the Lakers have had this season and James’ lost season because of injury, it seems like other All-Stars are less enthusiastic about playing alongside him.