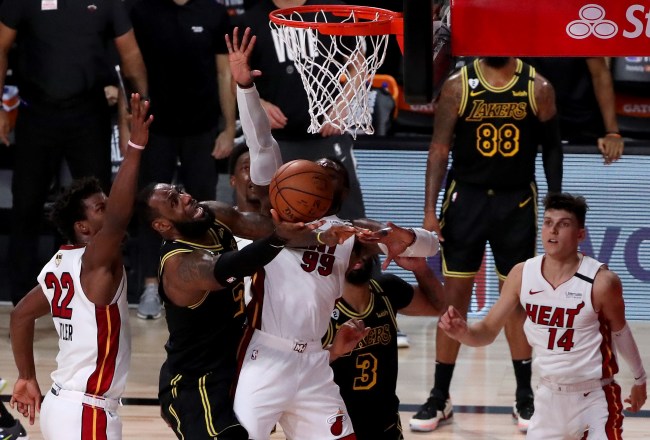 The Lakers lost a close game against the Heat on Friday night in Game 5 of the NBA finals and the refs may have played a part in the team’s loss.

After the game, Lakers head coach Frank Vogel blasted the refs for what he feels were missed calls that cost his team late.

Frank Vogel didn’t hold back about the late-game calls in Game 5 pic.twitter.com/EDxVjPExOx

While the league determined the calls Vogel was angry about it were correct, the NBA did admit refs missed an illegal defense call against the Heat with 28 seconds left in the game that would have awarded the Lakers a crucial free throw.

NBA officiating report disagrees with Frank Vogel, says referees correct on late fouls called on Lakers. But says illegal defense missed on Iguodala that could have given Lakers free throw and potentially a point with Lakers down one with 28 seconds to play.

The NBA also determined Butler fouled James on another play that should have given the Lakers two free throws but he ended up scoring on the play anyways.

The NBA says both fouls called late on the Lakers to send Jimmy Butler to the line were good calls, despite Lakers' arguments otherwise.

The league said LeBron James got fouled with 1:01 left and Andre Iguodala should have been called for defensive 3 seconds with :27 left. But..

… it should be noted that on the Butler foul of LeBron that wasn't called, the Lakers got the two points anyway when James put back his own miss. He would have had two free throws otherwise.

So at the end of the day, from the last two minutes, the Lakers wound up being denied one free throw attempt. LeBron's putback cancels out the two FTA he should have gotten on the same play (and, of course, assumes he would have made both).

The NBA did not look into the call were Anthony Davis appeared to purposefully hit Jae Crowder in the face.

At the end of the day the NBA isn’t going to reverse any non-calls after the game so there’s really no point in arguing about them.