Sports Finance Report: NBA Wants 1% of All Money Gambled, Equates to 20-29% of All Revenue 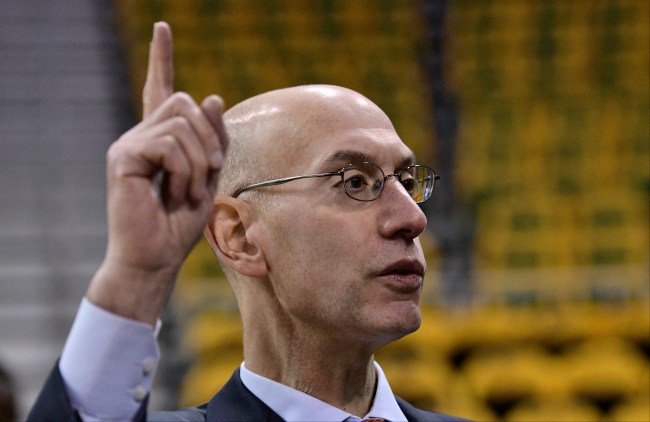 SALT LAKE CITY, UT - MAY 6: NBA Commissioner Adam Silver on the sideline prior to the game between the Golden State Warriors and the Utah Jazz in Game Three of the Western Conference Semifinals during the 2017 NBA Playoffs at Vivint Smart Home Arena on May 6, 2017 in Salt Lake City, Utah. NOTE TO USER: User expressly acknowledges and agrees that, by downloading and or using this photograph, User is consenting to the terms and conditions of the Getty Images License Agreement. (Photo by Gene Sweeney Jr/Getty Images)

In November 2014, Adam Silver became the 1st U.S. sports commissioner to openly support the legalization and regulation of sports gambling; suggesting a federal bill (as opposed to state initiatives, like NJ) and touting the potential benefits for the NBA (i.e. share in profits). On Wednesday, the NBA set their price (1% of all bets, not just on NBA games) to participate (in lobbying Congress for a national bill); seeking legislation that would authorize legalized gambling from mobile phones and kiosks, in addition to casinos and racetracks. The league also wants to limit prop bets that can be easily fixed, implement an age restriction and ensure a “rigorous licensing plan” is in place for sports betting operators. The NBA will allocate gambling revenue to the real-time monitoring of wagers and games.

Howie Long-Short: League attorney Dan Spillane touted the NBA’s plan as a solution that would offer “sports fans a safe and legal way to wager on sporting events while protecting the integrity of the underlying competitions.” That sounds nice, but as American Gaming Association President, Geoff Freeman said, “let’s get real about eliminating the illegal market, protecting consumers and determining the role of government – a role that most certainly does not include transferring money from bettors to multi-billion dollar sports leagues.” The NBA is in this for the money, and there is a lot of it to be made. In 2017, Las Vegas took in between $4.5 billion and $5 billion in wagers; just a fraction of the $400 billion Silver believes (AGA says $150 billion) is gambled annually on the black market. If even $50 billion is bet on NBA games (which sounds high based on the AGA estimate), the league would take in $500 million in new revenue; or roughly 12% of the NBA’s total revenue ($5.9 billion) in 2017.

Fan Marino: The average Las Vegas casino realizes a profit of between 3.5-5% of revenue. The NBA’s proposed 1% fee amounts to between 20-29% of total revenue; which would seem excessive. Need a reason not to gamble? If you had the Bruins -1.5 (vs. Devils) on Tuesday night, you had the game won (Bruins had a 3-1 lead) with time expiring; then this happened (notice the clock). The final score was Bruins 3, Devils 2.

Gatorade Sales Decline for the 1st Time Since ‘12

For the first time since 2012, domestic Gatorade (PEP) sales have slipped; -.5% to $5.9 billion in fiscal 2017. Health conscious consumes opting for alternatives to a sugary sports-drink and increased competition from upstarts like BodyArmor (no artificial sweeteners, coloring), have cut into Gatorade sales. Despite the negative news, the company still owns 75% of the U.S. market-share (Powerade has 18%, BodyArmor has 3%). Powerade sales remained flat, while BodyArmor doubled sales over the same period.

Howie Long-Short: Back in October, PepsiCo Inc. (PEP) CEO Indra Nooyi indicated the sales decline was temporary, attributing it to a down summer and slowing convenience store sales; but, trends showing consumers leaning towards healthier alternatives indicates PEP has a larger fundamental problem on its hands. Particularly, when you consider that Gatorade makes up +/- 20% of the company’s North American sales; but, Gatorade Organic (no artificial sweeteners, coloring) is responsible for just $20 million (out of $7 billion, .003%) in revenue since the products’ ’16 launch. The product simply hasn’t caught on.

Allstate Insurance Company (ALL) has signed-on as the title sponsor of RAM Racing’s Hot Chocolate 15K/5K Series; the company’s longest sustained commitment to endurance (or lifestyle) sports. The 2017-2018 Hot Chocolate Series makes stops in 17 U.S. cities (the ’18-’19 schedule is not yet finalized) and 3 locations abroad; with 15 of their 15K races, placing among the top 25 largest distance events of the year. RAM Racing, known as the leading endurance race producer, has had more than 1 million people run in their events since the company’s 2007 start (a single race in Chicago). Financial terms of the 3-year deal were not disclosed.

Fan Marino: Allstate may be new to endurance running, but the brand is synonymous with college football. ALL has been the title sponsor of the Sugar Bowl since 2003 and has its Good Hands logo on the field goal nets at 90 different collegiate stadiums. More fun facts: The “W” imprinted on Wilson tennis racket strings inspired the NFL to place the shield logo on nets at the 2002 Pro Bowl; the first time the league used the netting for branding purposes.