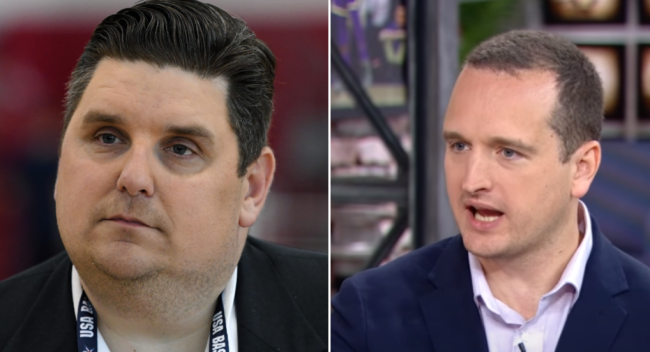 Earlier this week, Bontemps polled 101 media members about who they felt was MVP. As of now, media members polled by Bontemps believe Jokic had pulled way ahead of the MVP race after LeBron James and Joel Embiid suffered injuries in the past few months.

New ESPN story: With a month to go in the regular season, the latest MVP straw poll shows that Nikola Jokic is favored to win — and it isn’t close. https://t.co/i7M3ooZRge

Jokic, has been spectacular this season, averaging career highs of 26.0 points, 10.9 rebounds and 8.8 assists while also shooting career bests from 3-point range (41.8%) and the free throw line (85.3%). He was off to a strong start when this straw poll was last conducted, in mid-February, coming in third behind LeBron James and Joel Embiid, with just 164 points separating the trio. However, James and Embiid have missed significant time since then, allowing Jokic to pull away.

During the most recent episode of ESPN’s Hoop Collective podcast, Windhorst and Bontemps got into a heated debate after Windhorst suggested LeBron was way ahead of the MVP race before he got injured despite the Bontemps’ poll numbers saying otherwise.

Bontemps: The race was tied two months ago

Windhorst: The race wasn’t tied, LeBron had a significant advantage.

Bontemps: No he didn’t, you can’t make up facts now and yell like people on Twitter…You just said LeBron had a significant lead and that is a lie.

Bontemps: I’m not going to bother looking it up, he was barely ahead.

An annoyed Bontemps went to call Windhorst a jackass for continuing to question his polling numbers.

Windhorst: LeBron was way ahead and it was not a three-way race.

Bontemps: You can make up the rules to poll if you want, you want to do the poll in the future?

Windhorst: No, I’m glad that you do it.

Bontemps: Okay, then maybe you should actually listen to people because you’re being a jackass

Bontemps and Windhorst sound like they need to put on some gloves and vent their frustrations in the boxing ring.