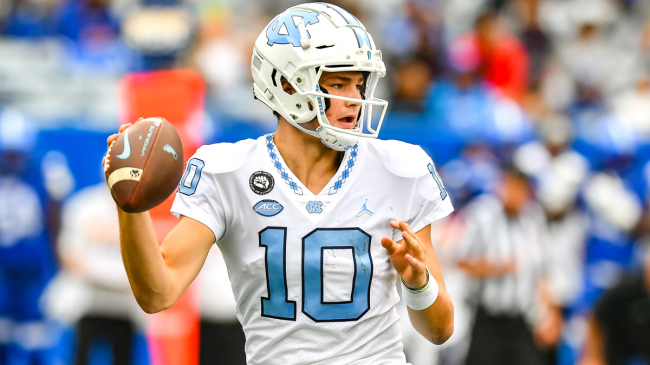 Drake Maye took over under center for the North Carolina Tar Heels this fall, and he’s exceeded expectations thus far. Through three games, the Tar Heels are 3-0 with wins over Florida A&M, Georgia State, and Appalachian State.

Maye has been a large part of that success, throwing for 930 yards and 11 touchdowns through three starts. He’ll see his toughest matchup to date this weekend when North Carolina hosts Notre Dame in Chapel Hill.

But it seems that the quarterback’s focus was somewhere else earlier this week. When appearing in a recent press conference, Maye talked about rival North Carolina State as opposed to the Irish.

As we all know, college football rivalries are a 365 day per year deal. There are no breaks, particularly among those that run deep. The Tar Heels’ series with the Wolfpack is no different.

On Tuesday, Maye made a quick dig at the Pack that’s sure to spice up the matchup during his time in Chapel Hill.

Maye attempted to troll NC State fans with a quip at that press conference aiming at Wolfpack supporters’ intelligence.

“Whether you want to admit it or not, growing up in Carolina, you’re gonna be a Carolina fan. Some people may say, ‘State,’ but really people who go to State just can’t get into Carolina.”

That smugness is why fans, particularly NC State fans, despise UNC. There is an arrogance around Chapel Hill, despite their shady academic past.

I’m a student there, ppl talk like this because it’s a top school in the state, around the prestige of wake and duke. Anyone who gets mad either didn’t get in or doesn’t work hard enough to get in. Results speak 🤷🏼‍♂️

And honestly, it’s a lazy take. Do better. Put that Carolina education to work.

Wolkpack fans were quick to blast Maye for the response.

Chapel Hill is one of the most revered and respected institutions in America, but many supporters like to forget that the university created fake classes for athletes over a 30-year period.

This fan wrote, “We in Raleigh went to class & flat-out worked for what we accomplished. Many..MANY decades summed up by a simple Google of “shadow curriculum” or “fake degrees” with UNC tag should circle back your thoughts, young fella..,” in response to Maye’s comments.

Another person asked, “Wasn’t Carolina having fake classes so those clowns could pass?”

Some of that reaction apparently got back to UNC because Maye offered an apology after the presser.

“I made a remark today about NC State, and I want to apologize. I was answering a question about playing in-state and said something I shouldn’t have. I said it as a joke but it was inappropriate. I feel bad and need to do a better job representing our program and this University.”

That apology won’t erase these comments from the minds of Wolfpack fans. It should be a fun one in Chapel Hill this Thanksgiving.