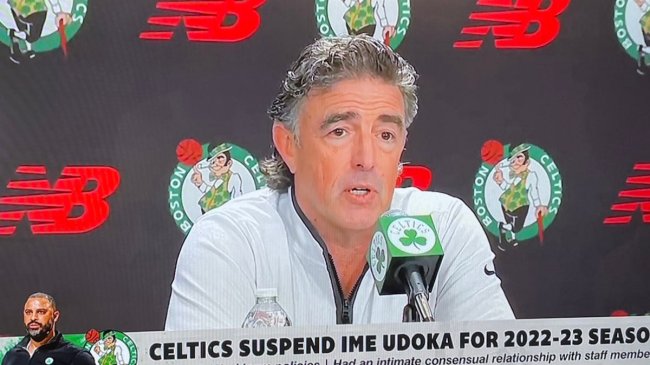 On Thursday night, the Boston Celtics released an official statement confirming that they had suspended head coach Ime Udoka for the entire 2022-23 season for engaging in a consensual relationship with a female staffer. While reports have largely indicated that the relationship was consensual, recent reporting from The Athletic found that Udoka allegedly made “unwanted comments” toward the unnamed female staffer.

Somewhat strangely, though — perhaps it’s just how they’ve always done things and they forget to amend their best practices in the midst of this PR nightmare — the official press release announcing Udoka’s suspension featured the logo for New Balance in the top right corner, making it the only non-Celtics-related piece of “branding” on the release.

Then, on Friday morning, as President of Basketball Operations Brad Stevens and Celtics co-owner Wyc Grousbeck were holding a press conference to address the situation, New Balance’s logo was once again prominently featured and the basketball world certainly took notice.

New Balance seeing their logo on this like: pic.twitter.com/6QzqWz8htc

The new balance branding during the Celtics press conference regarding their coach getting fired for having sex with a co worker lmao pic.twitter.com/acQlDohfI2

Todays sexual misconduct is brought to you by: New Balance! When you're slamming an executives wife in a storage closet, do it in comfort, do it in style, do it in New Balance. https://t.co/5Iq81hz4Yd

Why the fuck do the Celtics have new balance on their letter head. We already know y’all racist https://t.co/bjFL95iG8a

During Udoka’s suspension, 34-year-old Joe Mazzulla will serve as the Boston Celtics head coach. Heading into the season, the Celtics were one of the betting favorites to win the NBA title alongside the likes of the Golden State Warriors, Brooklyn Nets, Milwaukee Bucks, and Los Angeles Clippers.

While speaking at the press conference, Stevens and Grousbeck indicated that Udoka’s ultimate future with the franchise would be decided at a later date.

The Boston Celtics will begin their 2022-23 season when they take on the Philadelphia 76ers on October 18.