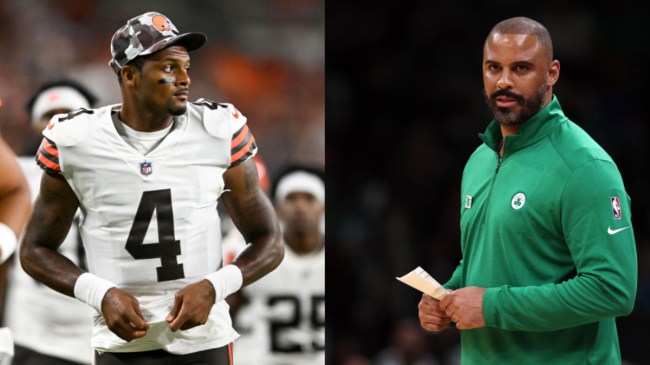 Following reports that the Boston Celtics had decided to suspend head coach Ime Udoka for a full season for workplace misconduct, the length of Cleveland Browns quarterback Deshaun Watson’s suspension is once again being criticized by the sports world.

While subsequent reports have indicated that Udoka allegedly made “unwanted comments” towards the female staffer, therefore resulting in the Celtics launching an internal investigation, that doesn’t change the fact that Watson finds himself not even serving a year-long suspension despite 24 accusations of sexual misconduct (all but one of the 24 women suing Watson have settled out-of-court).

“The situation remains vague, but details emerged late Thursday that while the relationship began as consensual, the woman recently accused Udoka of “making unwanted comments” toward her, which led to an internal review.” [via The Athletic]

It didn’t take sports fans long to make a connection between the two alleged incidents, as Twitter was flooded with tweets comparing the two men on Thursday:

*Ime Udoka going be suspended for 1 full year after having an affair with a married #Celtics employee.
*Deshaun Watson suspended 11 games after sexually assaulting over two dozen women.
In what world does this make any sense?#ImeUdoka #Celtics #DeshaunWatson pic.twitter.com/EuzqJVpSuq

You type Udoka it’s just pple tryna comp his suspension to Redacted… Deshaun Watson is the face Sexual Assault in pro sports 😂, that shit way worse than a suspension

The NBA suspends coach Udoka FOR 1 SEASON on sidechick at work allegations but Deshaun Watson.. ? ? Ok.

Udoka getting a longer suspension than Deshaun pic.twitter.com/mtA9muhOu9

I think the people comparing Ime Udoka and Deshaun Watson’s suspensions are foolish. Yes what Watson allegedly did was way worse, but it’s two different leagues and we’re talking about a team punishment vs a league punishment. The LEAGUE suspended Watson…the TEAM suspended Ime.

Ime Udoka is getting suspended for longer than Deshaun Watson.

Following the news of his suspension, Udoka — who led the Boston Celtics to the NBA Finals in his first season as the team’s head coach — released the following statement:

“I want to apologize to our players, fans, the entire Celtics organization, and my family for letting them down. I am sorry for putting the team in this difficult situation, and I accept the team’s decision. Out of respect for everyone involved, I have no further comment.”

Making the story even more headline-worthy is the fact that Udoka has been in a relationship with the legendary Nia Long for over a decade. Needless to say, Millenials like myself have absolutely roasting Udoka for allegedly cheating on all of our childhood crush.

Given that it appears many details of this story have yet to be made public, it’s hard to predict whether or not Udoka will ever coach for the Celtics again. In his stead, 34-year-old Joe Mazzulla will serve as interim head coach.