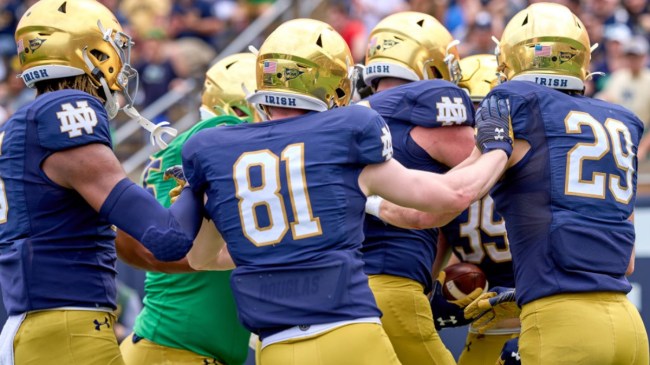 Many college football fans heard news they had been waiting a while for today. It was officially announced that the College Football Playoff will be expanding.

The expansion that ended up being agreed on will see 12 teams qualify for the playoff. While this will be good news for a number of programs, including the best from outside of the Power 5 conferences, the details of this expansion could contain some bad news for one major program.

When the full details were released they contained plenty of interesting information, including home games in the first round. However, there was one piece of information that could put Notre Dame at a significant disadvantage.

The playoff’s 4 first round byes will go to the highest ranked conference champions. Notre Dame doesn’t currently belong to a conference.

(Again, exactly what the Bowlsby/Sankey/Swarbrick/Thompson group proposed in June 2021 and three commissioners voted against.) pic.twitter.com/XLwftWU8Kh

This will leave Notre Dame fighting for one of the other 8 spots and guarantee that they’ll have to play a first round game in any year that they make the playoff.

They are. And if you'll recall, their AD, Jack Swarbrick, was one of the four who devised the plan. https://t.co/0nepASUkJZ

There is, of course, a simple solution to this issue. Notre Dame could join a conference some time before this expansion is reported to take place in 2026.

They previously competed in the ACC during the 2020 season to make sure their season could be played and even played in the ACC title game.

They have also been heavily linked with joining the Big 10, which has been aggressively pursuing some expansion of their own.

Notre Dame could solve their own problem in the next few years, but for now, it looks like they’ll be at disadvantage when the College Football Playoff expands.