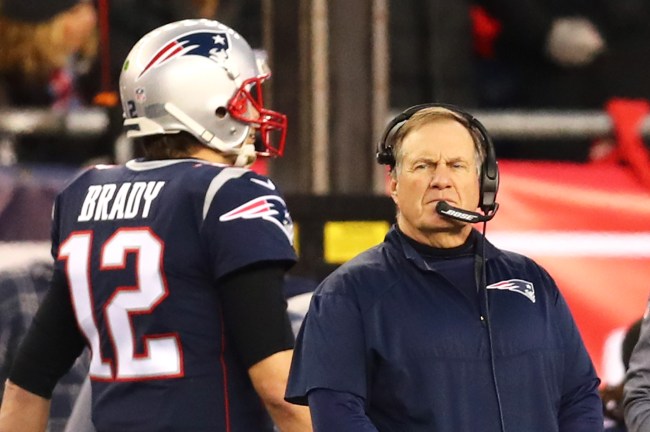 The New England Patriots are the most finely tuned franchise in all of sports. With nine Super Bowl appearances in the past 18 seasons — which includes six titles during that run — the team epitomizes what success should be. And, while it’s easy to point to having Tom Brady at quarterback throughout that timeframe as the reason for winning all the time, the culture was set by head coach Bill Belichick, who isn’t afraid to go in on his best player sometimes, even if it’s unwarranted.

Considering the New England Patriots have won so much in the past two decades, one might think that they could get soft on one another, and lack the appetite to keep that energy high every season. One reason for never slipping in that department? Belichick, who, as mentioned, won’t hold back on laying into Tom Brady to a) continue coaching b) push the quarterback to still work on mistakes and c) use the GOAT as an example for other teammates.

In a specific example, a former Pats player, fullback Heath Evans, spoke about a time when Belichick absolutely obliterated Brady during a game on the sidelines — while the team was up by about 50 points. Appearing as a guest on the “Your Mom’s House” podcast, Evans talked about how Belichick holds every player accountable, and how the head coach makes sure it all starts with making an example of Tom Brady.

“The best thing about Bill is, there’s not a whole lot of people that can ‘mother-(expletive)’ Tom Brady in a team meeting room,” Evans said. “When you’re in New England, if you’re the superstar, you get coached harder than everyone else. And if you’re the 53rd man on the roster or maybe the 35th guy on the roster like I was, then you’re going to be on this staggered scale of your level of accountability and how hard you get come down on because he knows, ultimately, me at the 35th man on the roster is going to follow Brady at No. 1 on the roster, so if Brady’s not challenged and he’s not working and he’s not held accountable then you create this level of inconsistency. And so that’s a gift in itself.”

Evans had a specific story from the famous 2007 season about Belichick not being afraid to rip Brady.

“I remember it was ’07, we smoked a team by like 50 points and Bill comes in and he’s mouthing off at Brady about something,” Evans said. “I’m trying to remember how it started, but he was like ‘If you weren’t so worried about you and Gisele’s next GQ Magazine, maybe, just maybe you wouldn’t have thrown that interception. What is this Christmas, it’s October, Brady. Christmas come early or something? I could go to Foxborough High and get someone to throw that ball better than you.’ So he’s just going at him, you know?”

Damn, no wonder the New England Patriots have created such a winning culture, because Belichick doesn’t give a f*ck what a player has done in the past, if he’s not doing his job in the moment, he’ll ream him out — even the GOAT. Now, a guy like Tom Brady is mentally tough enough to take the verbal abuse and use it as fuel, but other players might not be as headstrong.

You can check the full segment of Heath Evans talking about the story below.

He said Belichick told Brady "If you weren't so worried about you & Gisele's next GQ magazine, maybe, just maybe you wouldn't have thrown that INT" 😂

Look, coaches are meant to coach, and if that means getting on a player a bit to get his or her point across, so be it. All those people who can’t handle the heat and take things too sensitively need to get the hell out of here, because all-timers like Brady welcome the criticism from coaches like Belichick, knowing that it’s all to help the player improve. It’s part of the reason why the New England Patriots are who they are and why everyone talks about the “Patriot Way” as being so successful.