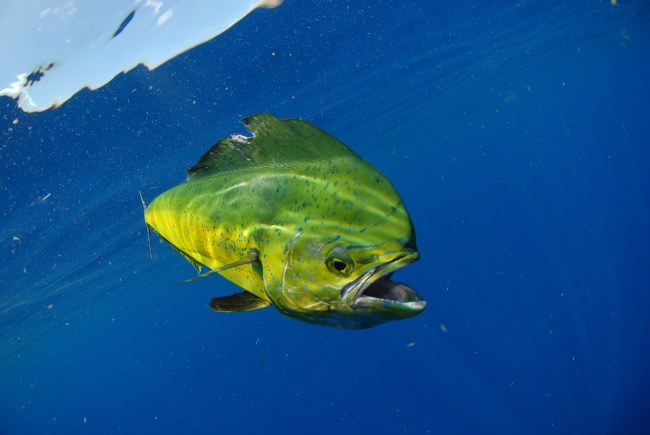 The offshore fishing in New Jersey is HOT right now, my dudes. Particularly at the canyons found 80-miles off the coast where the White Marlin bite has been electric in recent days.

Last weekend, 15-year-old Eddie Kelly of Ocean City, New Jersey reeled himself into the fishing record books during the Ocean City Marlin and Tuna Club Tournament, not to be confused with the White Marlin Open held in Ocean City, Maryland a few weeks ago.

Eddie Kelly was fishing aboard a boat named the Lisa Marie which ultimately won the tournament thanks to his record-setting Mahi Mahi. Previously, the largest Mahi Mahi, or Dolphin/Dorado, ever caught in the state of New Jersey measured 63lbs0oz. That fish was caught in the Baltimore Canyon by angler Scott Smith Jr. way back in 1974.

READ NEXT: The 25 Best Tasting Fish In The World, A Very Unscientific Ranking

The IGFA junior world record for Mahi Mahi is 61-pounds-8-ounces so he also has a pending junior fishing world record on his hands assuming they process the paperwork, which according to BNQT the fishing team said they would be.

The team fishing aboard the Lisa Marie managed to capture this badass footage of 15-year-old Eddie Kelly reeling in his state and world record Mahi Mahi.

While this was the fish that mostly won the Lisa Marie fishing team the tournament they wouldn’t have won without also releasing THREE White Marlin throughout the day (this was last Sunday).

“Eddie did an incredible job reeling in the big guy; he had never fought anything that big before and I was very impressed at how he handled it,” Ryan Gallagher, who was on the fishing team, told BNQT. “He didn’t skip a beat reeling it in, and made it easy for the rest of us to get the mahi-mahi in the boat.

“We are all very excited for Eddie. He’s had a love for fishing since he was a little guy, going out with his dad all the time.” (via)

I’ve caught some pretty large Mahi Mahi in my day. I’ve also caught plenty of really small Mahi Mahi. But I’ve never caught anything near as large as this 66-pounder. I think my largest Dolphin/Dorado is probably somewhere in the 40-45 pound range.

Kelly reeled in his record Mahi Mahi on 30-pound test which is pretty badass, and it’s also an opportunity to toot my own horn here and talk about how I caught my first Blue Marlin (a relatively small 300-pounder) while fishing with 30-pound test on a sailfish rig down in Costa Rica out of Los Sueños Marina. So while catching a big fish on 30-pound test is challenging it’s certainly not unheard of.

Actually, fuck that. I don’t want to take away anything from this bro’s accomplishment by talking about the fish I’ve caught myself. He’s in the record books and I’m not. He’s a local legend now and when he turns 21 I’ll happily buy him a beer and swap fish stories. Congrats, bro!

WATCH: 500-Pound Goliath Grouper Sucks Up A Shark As Easily As You Eat Popcorn At The Movies