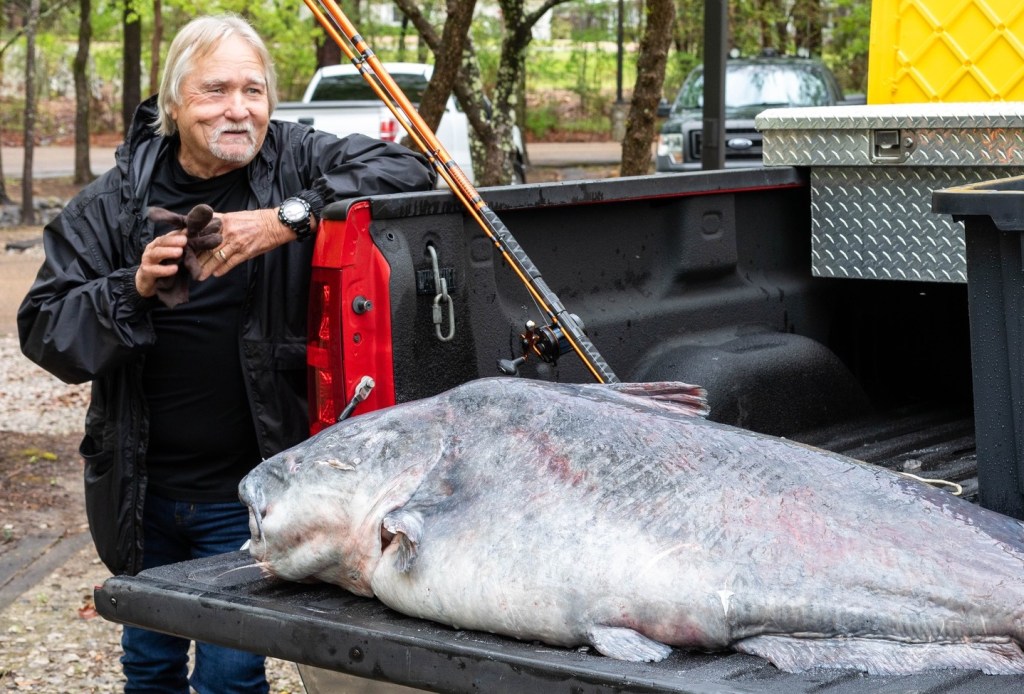 Via Mississippi Department of Wildlife, Fisheries, and Parks / Facebook

A man from Brandon, Mississippi just shattered a longstanding state fishing record in the Magnolia State. Eugene Cronley was fishing on the Mississippi River near Natchez (home of Stevan Ridley) when he reeled in a 131-pound Blue Catfish.

That 95-pounder was caught by Dakota Hinson in 2009 and has stood as Mississippi’s record catfish for years because it was caught a single angler using a rod and reel. There was actually a bigger Blue caught in 1997 but it took two anglers to reel in the 101-pound catfish, the largest one ever caught in Mississippi until now.

To break that down for you, Eugene Cronley’s Big Blue was 36 pounds heavier than the Mississippi state record of 95 pounds and 30 pounds heavier than the biggest Blue Catfish ever caught in MS. The IGFA fishing world record for the Blue Catfish species is a 143 lb 0 oz fish, so it was just 12 pounds shy of a world record. That specimen was caught by angler Richard Nicholas Anderson who was fishing Kerr Lake, Buggs Island, Virginia back in June 2011.

The Mississippi Department of Wildlife, Fisheries, and Parks announced the new state fishing record on Facebook with some incredible photos. When I first saw this fish I assumed it as an oversized Black Drum from the Mississippi River Basin. It didn’t even register at first that this was a Blue Catfish because it’s that big.

Here’s a lengthwise view of the fish:

Seriously, look at this absolute unit of a fish!

It took Eugene Cronley approximately 40 minutes to land this fish. That’s about how long it took me to fight my first Blue Marlin. I cannot imagine battling a catfish for the same length of time. It must’ve felt like he was pulling up a sunken Buick from the bottom of the Mississippi River.

Cronley was fishing with a skipjack herring as bait. That’s a tiny silver baitfish that almost looks like a tarpon the size of a minnow and while they can grow from 12-16 inches and even up to 3.5 pounds the smaller ones make better bait, in general.

Comments on the Facebook post from the Mississippi Department of Wildlife, Fisheries, and Parks are mixed. It’s a combination of people wishing that big fish like that stayed in the river to make bigger fish and comments from envious fishermen who wished they’d caught it themselves.

Blue Catfish Come In All Shapes And Sizes

One of the more fun things about the Blue Catfish species is how prevalent it is. The species is native to the Mississippi, Missouri, Ohio, and Rio Grande river basins. They can be caught as far North as Western Pennsylvania and as far south as Mexico’s Yucatan Peninsula. You can see a map of the fish’s natural range here.

A few months ago, a rare piebald specimen was caught on the Tennessee River. I referred to that fish as a ‘mutant species‘ and it’s easy to see why:

A piebald blue catfish. I would consider this fish the rarest catfish in the Tennessee River. I’m excited it happened in my boat! pic.twitter.com/S0Jc7MNmSj

They are also a relatively easy fish to go catch. All you really need to do is put yourself in the right location with the proper bait. Catching Blue Catfish doesn’t require a specialized boat or a flight halfway across the planet. Which is part of why it’s such a popular game fish in America.