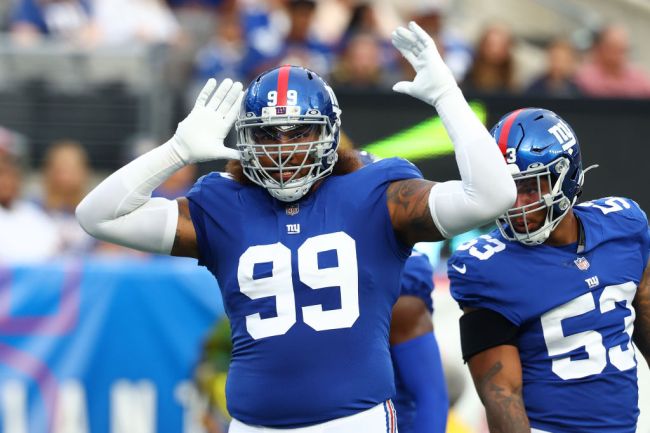 Defensive end Leonard Williams knows a thing or two about what it’s like to play on a bad team in New York— well, New Jersey. The 27-year-old spent his first four years in the NFL with the Jets before being traded to the Giants.

Having played his entire six-year career at MetLife Stadium, Williams has had one winning season and it came in his rookie year.

In his time with the Giants, the former USC Trojan has won and his franchise have won only 11 of their last 38 games. They are objectively bad with no positive outlook in sight.

As such, its fanbase is not happy. Look at the scene during the third quarter of yesterday’s loss to the Rams.

They were OUT of there.

Embarrassment @Giants a parade of people leaving in the 3rd quarter. Lifeless pic.twitter.com/wOkTyM3nTd

After falling behind 38-3, New York was able to find the end zone with six minutes left and make it a 27-point loss with a two-point conversion. The small smattering of fans that remained in the stands were incessant with their boos throughout the fourth quarter.

Bye-bye everyone. The stadium is EMPTY @Giants pic.twitter.com/c66RFvJbHS

Williams spoke with the media after the game and discussed the boos. He is frustrated with the lack of support from the home fans.

"We're in our home stadium, I don't want to be hearing boos from our own fans. I understand that they have a right to be upset because they're coming to see us put good football on the field" pic.twitter.com/M7EClgspr4

This is not the first time this year that a New York athlete is upset with New York fans for booing a New York team.

Earlier this year, Mets fans were ruthless toward their own newly-acquired shortstop.

Sheesh. Báez got showered with boos. Mets fans are one of a kind😂pic.twitter.com/ldn7qeyFtj

Javier Baez, like Williams, called out the fans for their lack of support.

"They've got to be better," Javier Báez said of the Mets' fan base.

His full comments on the team deciding to "boo" back at fans: pic.twitter.com/EgoMXhzZcD

Playing any sport in the biggest media market in the world is difficult. There is constant scrutiny.

However, for two different athletes in two different sports to be coming out against their own fans is a tough look. Get it together, New York.