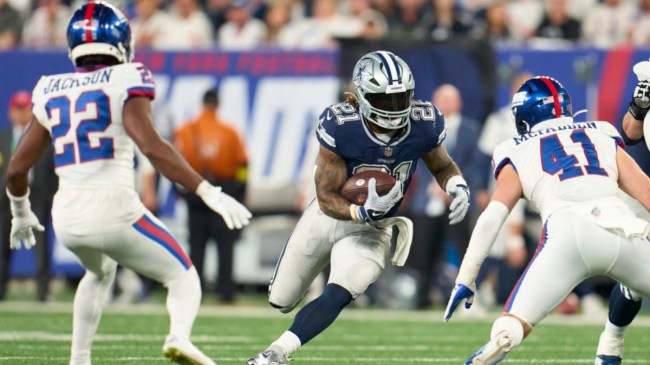 Last night was a tough one for New York Giants fans. Not only did their team lose for the first time this season, but they did it in primetime, at home, against the Dallas Cowboys with the Cowboys missing Dak Prescott.

Today, the loss got a bit tougher for Giants fans when The Athletic’s Dan Duggan revealed that the team only had 10 men on the field during a crucial moment when Ezekiel Elliot ran in a game-tying touchdown.

The Giants only had 10 men on the field for Zeke's third-and-goal TD run. They were in base personnel on the previous play. DL Justin Ellis and OLB Oshane Ximines came in, OLB Kayvon Thibodeaux, CB Adoree' Jackson and CB Cor'Dale Flott left the field. pic.twitter.com/PLujqpR8hV

Daboll said one unidentified player didn’t go in when Martindale called the personnel package at the goal line.

Zeke’s plunge from 1-yard out tied the game at 13 and was part of a 17-0 run that put the Cowboys in control of the game.

While the error is an embarrassing one for the Giants, it might not have even mattered if they did have all 11 players on the field. The Cowboys ran all over the Giants on Monday night,

Ezekiel Elliott ran for 73 yards on his 15 carries and Tony Pollard needed just 13 carries to run for 105 yards. Between the 2 running backs, the Giants were giving up more than 6 yards per carry.

With the Bears, Packers, and Ravens coming up over the next few weeks, the Giants will need to get their run defense sorted out quickly. If they can get that figured out, they’ll have a good chance to get back on track in a home matchup against the Bears.