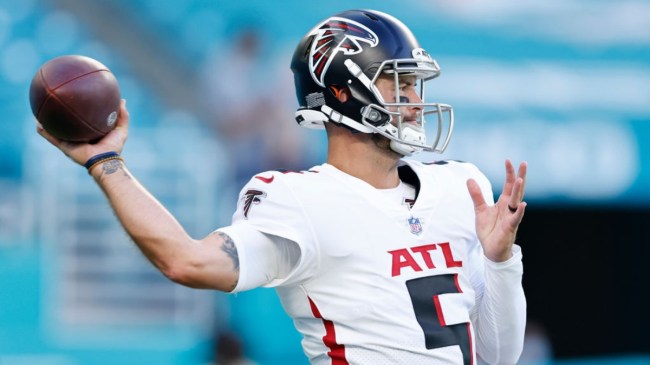 The New York Giants are off to their best start since 2011. Thanks to wins over the Tennessee Titans, Carolina Panthers, and Chicago Bears, fans of the 3-1 Giants have hopes of seeing their team in the playoffs for the first time in years.

However, those hopes almost took a big hit over the weekend. During their win over the Bears, the Giants struggled to separate themselves from their opponents throughout the game. Despite claiming the lead 10 minutes into the game and never letting it go, the Giants never led by more than 8 points.

That became a major issue late in the game. Near the end of the 3rd quarter, Daniel Jones suffered an ankle injury with the Giants only ahead by 5 points. Tyrod Taylor entered tha game to replace him and quickly threw an interception. On Taylor’s second drive, he was marching the Giants down the field when he suffered a head injury running for a 1st down.

The Giants don’t have a 3rd string quarterback. To finish out that drive, they had to turn to direct snaps to Saquon Barkley to finish out the drive. The Giants would get a field goal on the drive, but would potentially have to survive the last 5:31 without a quarterback.

They held on for the win, but it appears they are focused on avoiding future uncertainty. Today, it was reported that the Giants were working out quarterbacks, including former Alabama star AJ McCarron.

Among the QBs working out for the #Giants today is A.J. McCarron, sources say. He was with the #Bills in 2018, so there’s your Brian Daboll/Joe Schoen connection.

McCarron hasn’t suited up in an NFL game since 2020, when he threw a single pass for the Houston Texans and spent all of last year on IR with a torn ACL. Before the injury, he had only attempted 174 passes over 6 seasons.

The Giants will obviously need to sign somebody if Tyrod Taylor isn’t ready to go for Week 5, but they may want to turn back to Saquon in the wildcat before any of the QBs they’ve worked out if Daniel Jones is also unavailable.