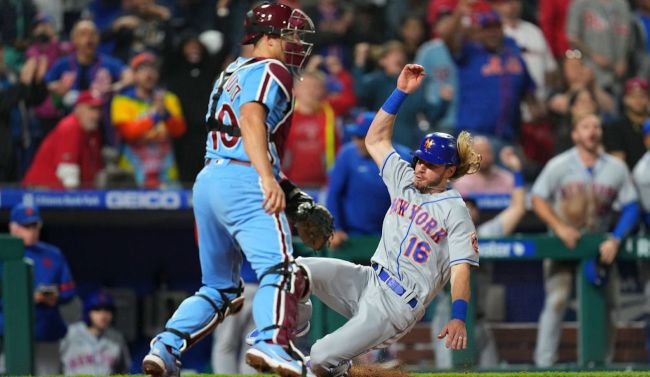 Don’t look now, but not only are my beloved New York Mets in first place in the NL East by 5.5 games but they’re actually looking like a winning baseball team, too, as evidenced by Thursday night’s historic six-run comeback against the Philadelphia Phillies.

Heading into the ninth inning, the Mets were trailing their NL East rivals by a score of 7-1. They had trailed for the entire game. And then, magic happened.

First came Starling Marte with a leadoff infield single. Then, Marte was brought home courtesy of Francisco Lindor’s two-run bomb. That was then followed by Mark Canha bringing in another run with an infield single and J.D. Davis roping an RBI double. To close off the inning, Brandon Nimmo delivered a game-tying two-run single before Marte closed out the rally he started with another double to take an 8-7 lead.

According to Elias Sports Bureau, the Mets’ Thursday night revival ended “a string of 857 consecutive losses by MLB clubs when trailing by six runs or more in the ninth.” [via CBS Sports]

You wanna watch that 9th inning over again? You know, the one where the Mets scored 7 runs?

The Mets — who currently lead the NL East with a record of 19-9 — will look to continue the hot start to their 2022 season when they take on the Phillies again tonight in Philadelphia at 7:05 p.m.